Okay, so I’m two for two on late posts, but hey, Las Vegas is a fast paced city, I can’t stay on top of this stuff all the time. To make up for it, I’m posting today’s right after I post this one.

Alright, so our Vegas day was a long one, let’s buckle in.

We started off the day with a breakfast at Paris, which was my favorite casino, but I’ll get back to that. Breakfast was awesome. They had pretty much every kind of breakfast food that you’d ever want, plus crepes cooked to order. The line was long for those, and I almost didn’t want to face it for a crepe. I’m not usually a crepe person. But I sucked it up and waited for a banana Nutella one. Totally worth it. Justin had one too. The both of us walked out of there in food comas.

Following breakfast, Mom, Grampa and I headed over to get day-of tickets for the David Copperfield show, the Solomon boys’ choice for our evening activity. The rest of the party met us near there, announcing that Auntie Brenda had put $100 on black and doubled her money. Lucky! Later I would put all of my gambling money on black, and I would never see that money again. Memere also doubled her money on a slot machine. She put in $5 and came out with $10. The day was off to a good start.

From there, we began the journey to see the Shark Reef Aquarium at Mandalay Bay. Now, I’m not sure that everyone who is reading this has been to Las Vegas, but let me explain. It’s a very misleading city, in that you can see nearly every casino by looking down the strip. From Planet Hollywood, we could see Mandalay Bay clear as day, like yeah, we can totally make it there no problem. Well, in the same way that you can see the Empire State Building from just about every corner of Manhattan, you should know that just because you can see something does not mean it’s close. We walked for what felt like miles in the hot sun. Yeah, there are opportunities to walk inside the casinos through the air conditioning, but then you find yourself weaving in and out and walking further. It was a tough decision though, considering whether to walk twice as far in the air conditioning, or to barrel down the strip in the sun.

It’s especially difficult considering how hot it was. Everyone told me “Yeah, it’s going to be hot, but it’s a dry heat.” You know what else is hot and dry? An oven. Yeah, we weren’t sweating as much as we would in humid weather, but I felt like I was roasting. On the other hand, paired with the heat was the magnitude of the beautiful feeling of the air conditioning. You’d walk through a pair of sliding doors and suddenly you felt as if you’d been graced by the gods themselves. It felt like being kissed by a million ice cube angels.

After our long walk, we eventually did make it to the Shark Reef Aquarium, without Memere and Grampa, who had stopped at New York New York to play some games. After his long, arduous journey, Matthew was finally in his element. He was running from exhibit to exhibit, shouting the name of each fish with glee and then sprinting to the next tank. Once we got to the exit, he realized that it had come to an end, and asked Auntie to go back through with him. He lapped the place twice. Meanwhile, Mom and I tried and failed multiple times to take a selfie with fish behind us. Check out the pictures in the album with this entry, it’s pretty pathetic.

At this point we split up. Matthew, Justin, Owen, Auntie Brenda and Auntie Stacey headed back in a cab and mom and I walked back, with the intention of stopping in some of the other casinos. I won $5 at Excalibur and Mom won $138 at a slot machine in New York New York. Yup, I know, don’t you hate her.

Now, I don’t want to give a lengthy explanation to every casino we went in and what we did there, so instead I’m going to give my brief impression of each one I visited:

Mandalay Bay: The theme of this resort is “Classy.” Yep, apparently that can be a theme on its own.
Luxor: It’s the Contemporary, but you feel like you might be attacked by Imhotep at any point. If you don’t get that joke, watch the Mummy.
Excalibur: If you’ve been to Shrek 4D at Universal Studios, it’s pretty much that.
New York New York: All the wonderful, sights and sounds of New York City and minus all the smells, thank god.
MGM Grand: The entrance looks like a cool old style movie theater, and then inside it’s just a casino.
Monte Carlo: Wasn’t really in here long enough to give my impression. There was a candy store?
Aria: It’s like the architect who designed it said, “Let’s take a shopping mall and make sure that none of the angles of the walls are straight lines.”
Cosmopolitan: Have you ever seen the cover of Britney Spears’ Oops I Did It Again, or Mariah Carey’s Glitter? Yeah it’s kind of like those two images combined, on crack.
Planet Hollywood: If someone were to say “picture a casino,” it’s pretty much what you’d think of.
Paris: So like, if you were to ask me, “Design a gorgeous building that’s themed like one of your favorite places in the world,” and then I hired someone else to do it because I have no talent, it would wind up looking like Paris.
Bellagio: I felt like I was too poor to be walking around in here. Why am I allowed to walk in here. Ooh, look a flower turtle.
Caesar’s Palace: It’s like the architects said, “Hey, there are lots of famous topless sculptures in Classical history. Since sex sells, let’s put them everywhere.”
The Linq: Hey, we can get to our hotel through here.
And Harrah’s: We could go to this casino in our pajamas if we wanted to.

After walking around, a dip in the pool, and some refreshing, we all went to Serendipity for dinner, which was really ice cream. We got some apps to make sure we got some sustenance, then gorged ourselves on giant sundaes. Justin and I got specialty sundaes that were a little too big for us to finish. Really, they were probably each meant for like three people to share.

After dinner, Justin, Owen, Stacey, Brenda, Mom and I went out for our evening entertainment to see David Copperfield. The guy can put on a show. I won’t give away any of his tricks, in the event that anyone reading this hasn’t seen him before. Some were pretty basic, making stuff levitate or disappear, but even better than the show itself was just his ability to entertain. He was good.

After the show, Justin and I hit up the Manhattan Express, the roller coaster at New York New York that I had seen on a Travel Channel special when I was like 10. FINALLY, I got to ride it, and it was awesome. I’m glad I did it at night, cuz you could see all the lights on the strip from the top of the hills.

We walked back to the hotel, stopping at the Bellagio fountain on the way. The dancing lights were coordinated to “Hey Big Spender,” which was cool, and very Vegas fitting. It did not disappoint.

Mom, Stacey, and then returned to our room and collapsed to bed. 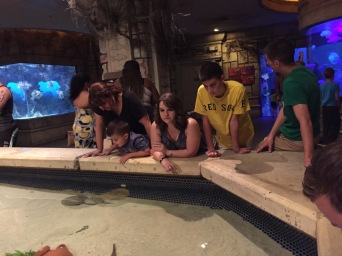 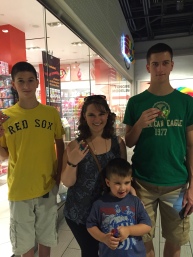