We got up early again for another long day of adventures. We had breakfast at the hotel before loading up the car and heading to the world famous San Diego Zoo. Matthew was bouncing off the walls before we even left.

We started the day at the zoo with a bus tour. We all boarded the top portion of the double decker bus to get a tour of the park before we walked around on foot. This was a great start to the day, because we got to see almost all of the exhibits early in the morning before the park was too crowded, while the animals were active, and without having to stand up. As a lazy human, I was happy with this.

From there, we took off to explore the zoo on foot. We were really lucky with how active the animals were. Lots of them came up close to us, and we got to see a lot of baby animals. Seriously, nearly every exhibit had a baby animal of some kind. The cutest was the baby jaguar. She kept playing with her food bowl like a puppy. Also, the baby gorilla climbed on his mommy’s back, and the baby hippo was hiding underneath his mommy. It was a good day for cuteness.

Matthew was frantically running from exhibit to exhibit to bask in the glory of the Mecca that was the San Diego Zoo. He was looking at the map, looking at pictures, darting from one place to another, and proclaiming his next destination of choice. “I wanna see the bears!” He was also a pretty popular character from the animals’ point of view. Many of them came right up to him, practically posing for pictures.

If I were to tell you about every animal encounter we had, we’d be here all day. There were a lot of fun ones. The meerkats were running around like little cartoon characters, the lions were taking a very dramatic nap, and the pygmy hippo got up close and personal with Matthew. All of it was really cool, and I really do believe that this is the best zoo in the world. Our funny bus attendant reminded us of that this morning. She was from Rhode Island. One of us. One of us.

Justin, Owen, and I realized that we were not going to be able to keep up with Matthew for much longer, so we separated ourselves from the group and hung out in a restaurant by the exit. After finishing up at the bear exhibit, the other half of the group reconvened, and we headed back to the hotel for a respite before dinner.

After our relax time, we headed out to Old Town San Diego and the Fiesta de Reyes, an old district of San Diego composed of centuries-old Spanish-style buildings. These days it’s a fun, lively restaurant and shopping district. Here, we settled down for a good dinner at Casa de Reyes with Memere’s cousin Lynn, her daughter Monique, and her grandkids. I got a combo platter with a taco, enchilada, and Mexican rice. It was the best Mexican food I’ve ever had. They should open a franchise in Londonderry, I’d probably eat there at least weekly. Then of course we topped off the meal with some fried ice cream, which was, again, the best I’ve ever had.

Following dinner, we ventured out into the shopping area to see if we could find any goodies. If you know me, which you probably do if you’re reading this, you know if I go shopping, I will find goodies. And I did. At Tafoya and Son Pottery, a little shop with a wooden porch and tiles molded into the dirt floor, I bought a small clay pot, which I intend to use on my desk for storing paper clips. Mom also bought a clay gecko, repping the Grinnell Geckos. Then I found the promised land, Toby’s Candle and Soap Shop, an old fashioned, general store looking building with high ceilings and a heavenly aroma. I bought a bath fizzie and some incense. I was a happy camper. I love soap in all its forms.

While I was shopping, Matthew apparently tripped and fell while playing with his newly acquired slingshot. It was a dramatic fall, resulting in his imprint being left in the dirt, and having himself plastered from head to toe in bandaids, despite the lack of any scrapes or blood.

We ended the night passing a pair of abandoned pants in the parking lot. Not knowing that the pants had probably come from some scary homeless person or other, Matthew proceeded to ask everyone in the party if they had lost their pants. After everyone responded “no,” the ownership of the pants fell to the only missing member of the party, Memere. We returned to the hotel room and gleefully asked her what had happened to her pants. She was confused. 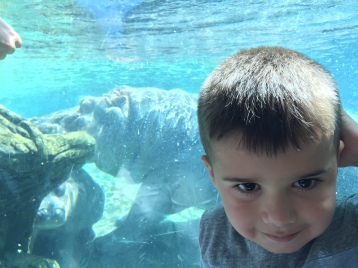 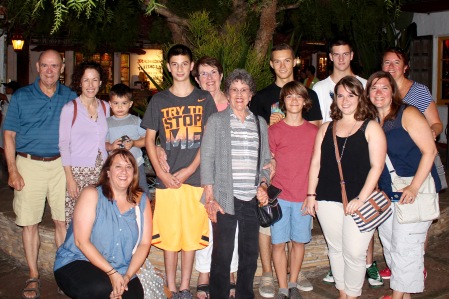