So I’m running behind on these. This is due to the fact that I have lost my built-in writing time on the bus. Once we reached our final destination of Paris, that was it. No more bus time. Sad face.

Our two-day Paris adventure began with a long drive from Switzerland. This bus ride was probably one of the quietest, and I’m sure that has absolutely nothing to do with the fact that we’d stayed out till God knows how late at the dance club. The only reason I made it onto that bus is because Steph decided to knock on our door to make sure we were awake. Turns out we weren’t. We’d forgotten to set an alarm. Luckily we had just enough time after her knock to gather our things and prep for the day. Thank god for Steph.

We had about 8 hours of driving time through the Swiss and French countryside. It was raining for a long stretch of the journey. Matt informed us that it was okay, because it was Swiss rain: the clearest, most beautiful rain there is. Everything in Switzerland is perfect if you ask Matt.

We arrived at the Ibis hotel, which Matt had told us was one of the nicer ones on our trip. Based upon the lobby, we agreed. The room however had much to be desired. It was tiny with very little space to move, as the majority was taken up by the three beds. There was only one outlet, which caused for some logistical issues. Also there was no outlet near a mirror for straighteners or the like. So, yeah, the room is pretty and classy, but still not the nicest. Munich wins the nicest hotel award.

After freshening up a bit, we all piled onto the coach for a bit of a driving tour of the city as the sun was catching the buildings at a gorgeous angle. Paris is very spread out, so it was nice to be able to see all the sights without having to walk from one to the other. Rewind 4 years ago, and that’s exactly what I did. I don’t recommend it.

We drove by the Louvre, Notre Dame, the Eiffel Tower, many other museums and government buildings, and made our stop at the Arc de Triomphe. Our tour had originally scheduled us to go up the Eiffel Tower, but due to the Euro Cup, the major European football tournament that was being hosted in France that year, security and crowds have increased exponentially, and therefore we were told to go to the Arc instead. The good thing about this is that from the Eiffel Tower, you can see all of Paris….except for its most famous landmark. From the Arc de Triomphe, you can see all of Paris, including the “big pointy thing” as Matt always called it. We climbed up the spiral staircase, heaving and coughing as we made our way to the top. It’s not easy climbing that thing. I told Matt that this is why they called it the Arc De Triomphe, because it’s a triumph every time anyone makes it to the top. Thanks dad, for making your sense of humor rub off on me. We snapped a few pictures, enjoyed the view, and before we were knew it we were trudging down the spiral staircase.

In a similar fashion to Munich, we were given the option to either bus back on the coach or stay out. In true Contiki #noregrets style, I stayed out in the city with Drew, hoping to soak in some of the city at night, seeing as I hadn’t had the opportunity before. We linked up with another crew of Contiki people, who had gone out to bar hop. We all wound up outside a pub, drinking beers and watching the Italy/Germany football game. Now, I enjoy sports. Hockey mostly, and I’ll watch the Pats or the Sox on occasion. Soccer/football? Not my thing. Meh. There were only 15 minutes left of play, but of course then the game went into overtime and then also a shootout, so we wound up being there for like two hours. I was getting antsy to walk around Paris. I will say standing outside a pub with a bunch of crazy European soccer fans is quite the immersive experience. Also, Germany won, so we were happy for Leo, the German guy Drew hung out with in Munich.

Following the game, Drew and I split off to see more of the city and take some pictures. Finally! We strolled the Champs-Elysses, made our way over the Ponte Alexandre, my favorite bridge, and then strolled along the Seine. It was all so beautifully lit and romantic. The way the light glints off the gold on the buildings and the river water is just enchanting.

After our stroll, we hopped on the metro en route back to the hotel. Remember my love and devotion to the Tube in London? Yeah I do not have the same fuzzy feelings about the Paris metro. It makes the Boston T feel like the Tube. And that’s saying something.

After a train ride, we popped out of the metro and walked the rest of the way to our hotel. This day had been a little taste of Paris, and I was excited to see what would come next. 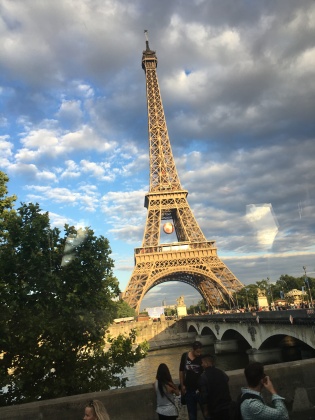