Alright. Here we go again. I’m off on another adventure, this time COMPLETELY SOLO. –Insert ominous music here.- Of course it’s not completely solo. I’m doing another Contiki tour, during which I’ll likely become acquainted with new friends and companions. Who needs to get on a plane with someone when you can meet all your buddies en route?

I began my tour at my grandparents’ house. I’d like to take a moment to thank them for taking me out for a pre-trip jaunt to the Cheesecake Factory, as well as driving me to the airport, albeit two hours late, due to a super inconvenient delay. I was meant to be in the air by 6:55pm, but alas, we were delayed until 9:05. It wasn’t terrible, however, as it left us time to get to the airport early for a celebratory glass of wine before heading air-bound. My grandparents are better than your grandparents.

Finally, after killing some time in the airport, I made it aboard my flight. I had an emergency exit row seat, which was exciting at first, due to the extra legroom and my ability to get up to go to the bathroom without disturbing anyone. It was less exciting when I realized that I couldn’t stow any of my luggage under the seat in front of me. Because there was no seat in front of me. As a short person, this stressed me out. But the German flight attendant had no pity for me. She reminded me every two seconds that I needed to stow everything, including my blanket. Although, she made up for it by getting my blanket from the overhead bin for me once we’d taken off. By that point, we were square.

My first flight was six long hours. I didn’t sleep a wink. I tried to watch random episodes of Parks and Recreation to trick myself into falling asleep the way I do at home. It didn’t work. Even with my fancy new neck pillow. I was plenty comfortable, my feet were just cold, and I had a bunch of random 90s cartoon theme songs stuck in my head for some reason. Anyways. Those 6 hours went by pretty slow.

The good news was, once I landed, and awkwardly retrieved my items from the very high-up overhead bin, German customs was incredibly easy to get through. I was in and out of line in under 15 minutes. This probably had to do with the small and convenient size of Dusseldorf Airport. It’s like German version of Manchester Airport! But I wasn’t out of the woods yet. I still had to make it from Dusseldorf to Berlin.

Well, I made it onto the next flight alright, despite thinking I’d miss it due to my delay. However, getting to my seat was a bit of a challenge, considering there was no room left in the overhead bins. I attempted to squeeze my backpack into the bin above my seat. I almost dropped the bag on the guy beneath me. I quickly apologized, “Sorry! Oh my gosh sorry!” and while I was fussing over him, the half-full water bottle from the side pouch of the bag fell out and hit a different guy on the head. I was mortified. I recoiled. “OH MY GOSH I’M SO SORRY!” I muttered, my face beet red. Now, a normal human would realize that it was a mistake and let it go. This guy was not one of those guys. He muttered “It’s alright,” in a tone that let me know that it was definitely not alright. He was not my biggest fan.

That second flight was up-and-down. By the time they’d gone by with the beverage cart, we were already descending. Before I knew it, I had my luggage, and I was en route to my hotel in Berlin.

I knew I wouldn’t be able to check in immediately, but I knew that some other Contiki people had already arrived, so I had people to talk to while I killed some time. Almost everyone on this tour is from Australia. We could stick a pin in every major Australian city to represent the people on this tour. There are only a handful of Americans, but hey, that’s kind of cool. It’s nice being the “different” one for a change!

Soon I was able to get into my room and meet my roommate, Hollie, of Melbourne, Australia. We had lucked out, paying for a triple-share room. However, the way that the numbers worked out, we were the two oddballs left over without a third. So basically, we get extra space for a lower cost! Whoo!

After seeing our room we had our trip meeting with our guide, Emma, and our driver, Frank, both of whom seem relaxed, fun, and knowledgeable. Just what you want when you’re traveling to new places. After the meeting, we were able to mingle with more people on the trip. Just like on my last trip, it was incredibly easy to get talking to one another, just knowing that we’re all in the same boat, loving travel and adventure.

From there, we were off to dinner at a trendy restaurant in a shopping complex in Berlin’s center. If you recall from my last blog, I have a love affair with German food. I got grilled sausages with mashed potatoes, and it did not disappoint. For dessert, we had ice cream served with berry compote. It sounds kind of weird, but it was actually really good. It was kind of like a cobbler but without the biscuit part. Very tasty. 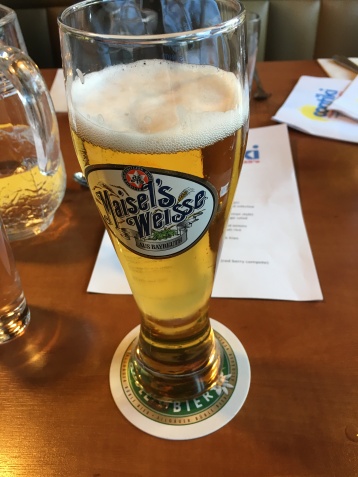 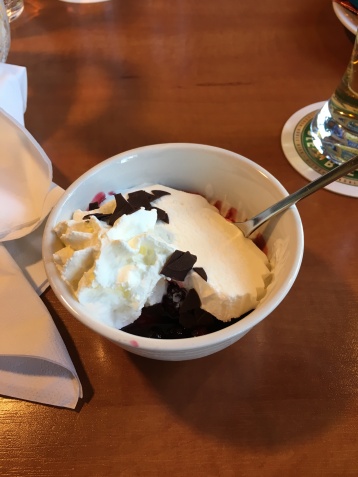 By the time we left dinner, the weather was gorgeous outside, and the sun was in just the perfect spot for some photos. Our tour guide directed us around town to some of the more famous spots in Berlin to get some cool photos. We saw the Reichstag up close, which looked absolutely gorgeous with the sunset behind it. And we snapped some pretty cool pictures.

Hollie and I opted to go back to the hotel, while some of our more adventurous companions decided that tonight would be a great night to go out to test out some bars. Considering a night club is already on the agenda for tomorrow, I’m going to stick with a good night’s sleep for this evening, considering I haven’t slept in almost 30 hours at this point. This blog post might be littered with spelling errors. Who knows! I’m sleep deprived!