Our adventure to the next city began with a stopover in Bratislava, the capital of Slovakia. That’s right. I’ve now been to Slovakia. It’s a charming little country, once connected to the Czech Republic in one supercountry known as Czechoslovakia. But, after a few generations of differences, they divided, in an event now known as the “Velvet Divorce,” because they separated with no violence and in almost total agreement. It’s good to know such agreeable things can still happen in the world.

We only had about two hours on this stop, so we pretty much had to decide if we wanted to spend our time exploring the sights or sampling the cuisine. We chose scenery over sustenance, grabbed an order of fries from McDonald’s, and started heading up to the centuries-old castle at the top of the hill. The walk was arduous, but worth it. The view from the top of the hill was absolutely lovely. We all climbed on the fortification to take aesthetic photos of ourselves. Heh. We probably would have died if we fell, but whatever. I figured I needed to do something wicked stupid on this trip at some point. 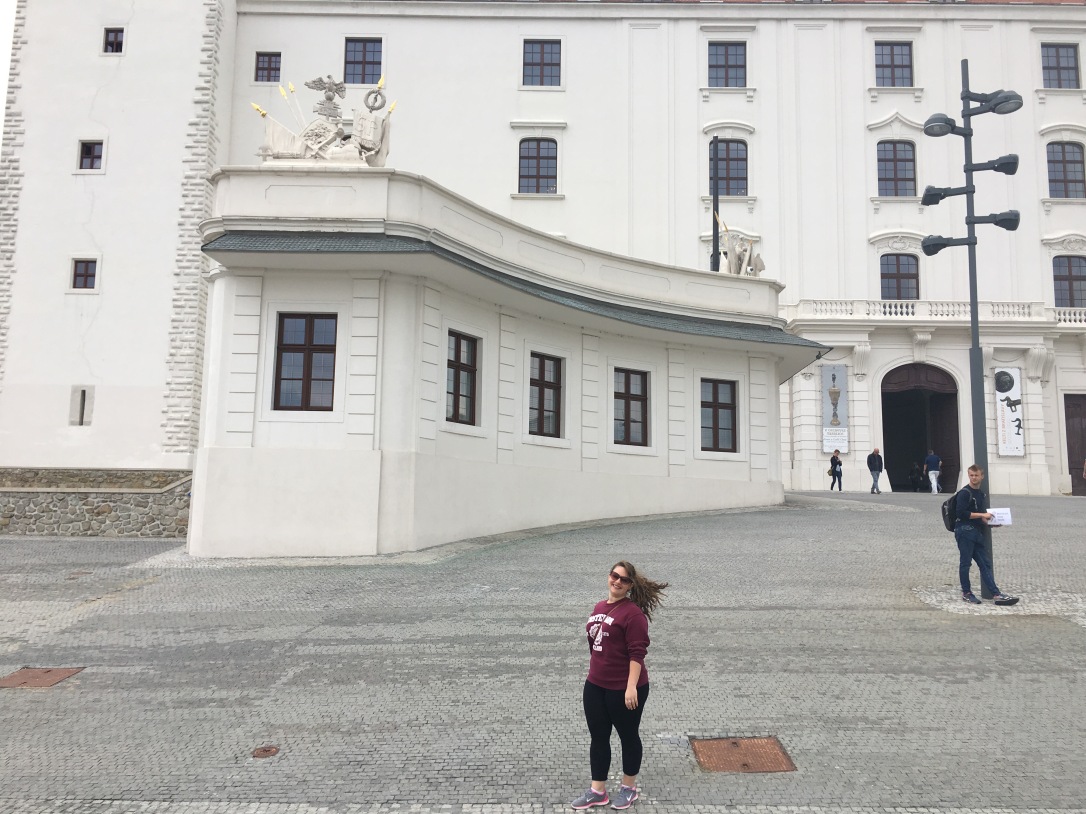 After leaving the castle, we had time for a quick coffee stop. On our way up the hill, we’d stumbled across a little hole-in-the-wall café called the Drak-and-Finch (Dragon and Finch), so we decided to stop in and take a little break before hitting the bus. It was a tiny but super cute little place, and the Slovakian guy there running it was really nice. We googled how to say “thank you” in Slovakian, which made him smile. We’re not really sure if he was genuinely happy we’d told him “thank you” or if we’d butchered the pronunciation. 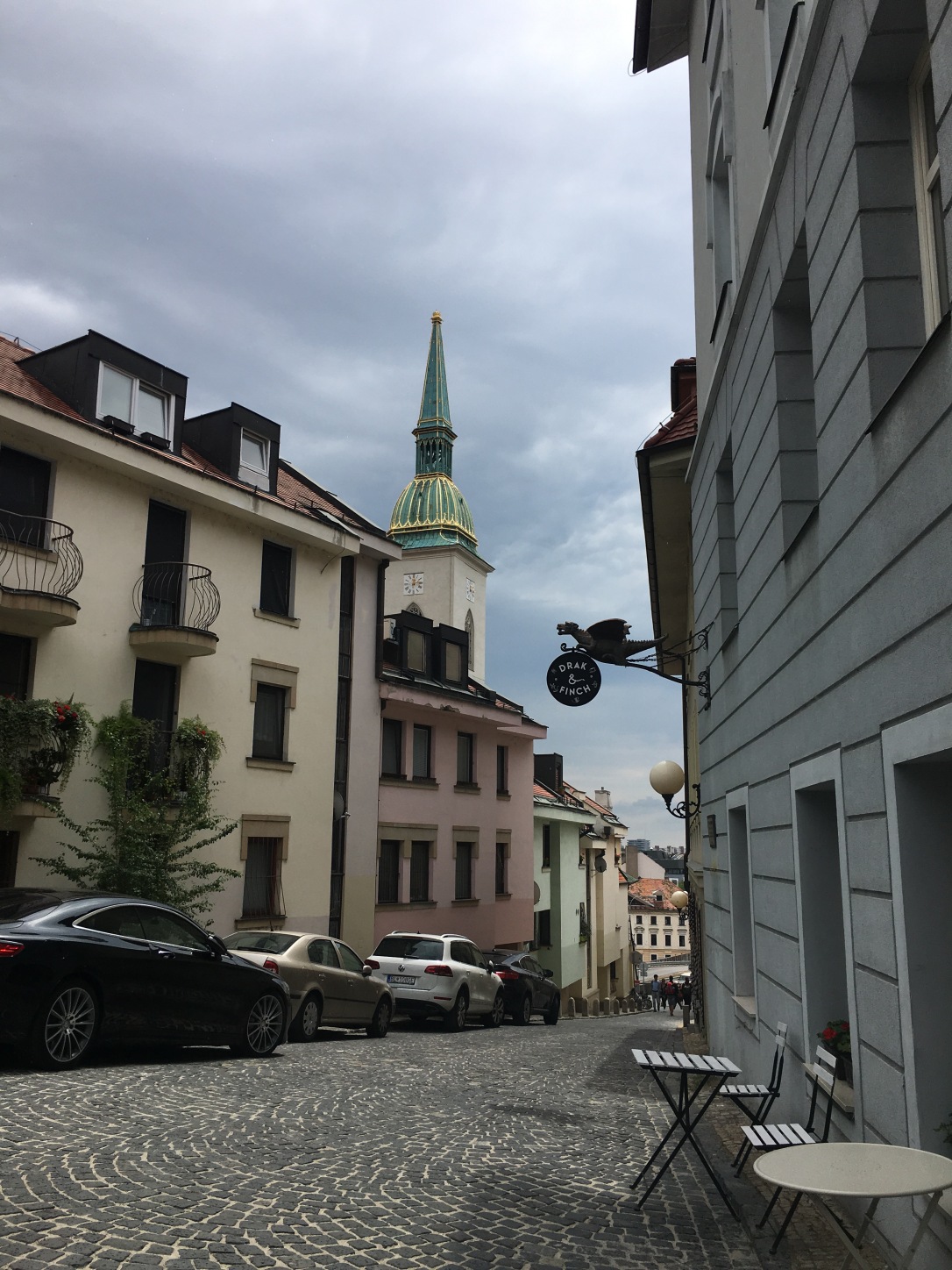 Bratislava was like a little hidden gem. In only two hours, we didn’t exactly have time to immerse ourselves in the Slovakian culture, but we were still happy to have made the stop.

Soon we were back on the road for another two and a half hours. Towards the end of the drive, we got to hear about Hungary. A noteworthy point about Hungary is that its language is incredibly difficult to learn. It’s ranked the #3 most difficult behind Icelandic and Finnish. Just reading the language on signs, I noticed there are a lot of words that have S and Z combined that look odd in English. Also, “s” by itself makes the “Sh” sound, while “s” with a “z” next to it makes the “s” sound. So Budapest is actually pronounced “Budapesht.” Once you know how to say these words, it’s not difficult to pronounce, but it looks weird on paper. For instance, the word for “cheers” is “egeszsegdre,” which looks inconceivable, but it’s just pronounced “egg-a-sheg-a-dreh.” Which is THE most fun word to say ever, especially before having a drink. 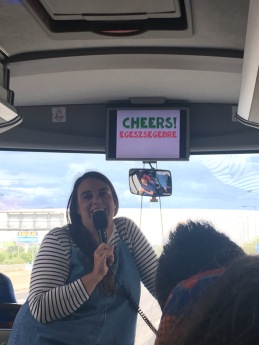 After settling into our hotel, which was straight out of 1980, we were off on our first Budapest adventure, a quick little driving tour around the city. As soon as we met up with our guide, she told us it was going to be a three-hour tour. We all panicked internally. We thought dinner was going to be much sooner than that. As excited as we were to see Budapest, we were also all starving. Alas, we soldiered on, ignoring the groans from our stomachs.

Budapest is actually two cities divided by the Danube River: Buda and Pest. Fancy that. Buda is hilly with really beautiful panoramic views of the rest of the city. It’s also where the rich population lives. Our guide said that there’s a saying that “there are two types of people: those who live in Buda, and those who wished they did.” So basically snobs live in Buda. But Pest, on the other side of the river, is where the party’s at. The museums, the shops, restaurants, historical sites, churches, nightlife, and really anything else you’d want to see: they’re all in Pest. So take that, Buda snobs.

Our hotel was on the Buda site, in the suburbs, so we started our three hour tour on the Buda Side, where we drove up to a hill that housed one of the city’s famous and most controversial monuments. It features a woman holding a palm branch high in the air. This monument was erected during the communist regime in Hungary, as a symbol of “freedom” provided under the new government system. During that period, it was known as the “Liberation Monument.” However, after centuries of oppression by that communist regime, it was renamed to the “Liberty Monument.” Some people are mad it’s still up, but hey, at least it’s been repurposed.

From the top of that hill, we were a little distracted by the amazing view behind us to really appreciate the monument. You could see the whole city, river included. All of those buildings I’d seen on blogs leading up to the tour, they were all there, dotted along the Danube. We spent a solid 20 minutes taking as many photos as our cameras had room for. Little did we know, this was really just the appetizer, and the main course was next. 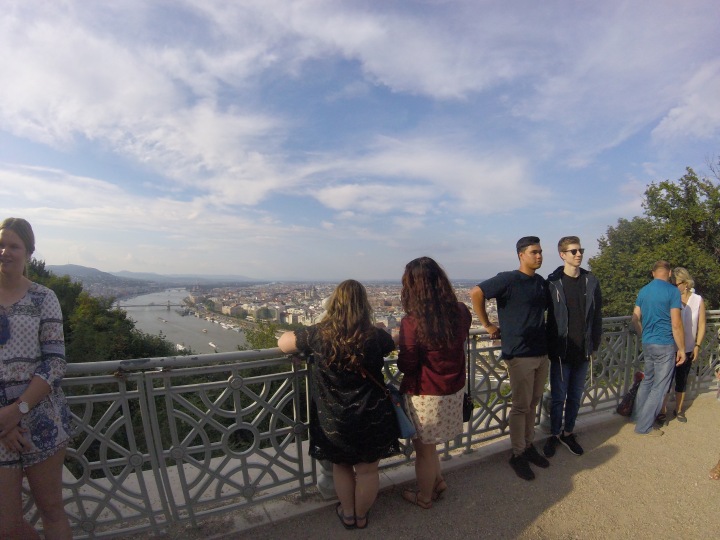 We departed for Fisherman’s Bastion, a set of fortifications named after the fishermen who used to guard the beautiful St. Matthias church from invaders. Straight through the fortifications, you could see all of the beautiful Danube buildings in Pest. Again, armed with cameras, we took advantage of the gorgeous view and perfect weather and snapped away. 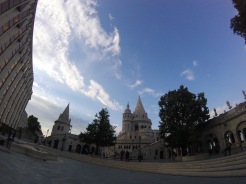 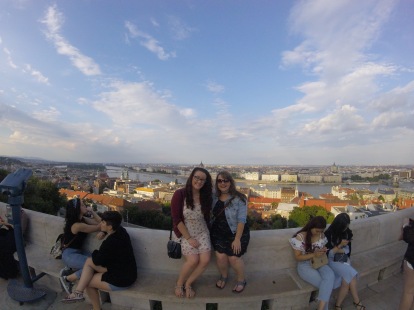 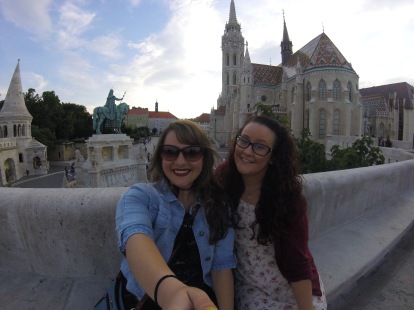 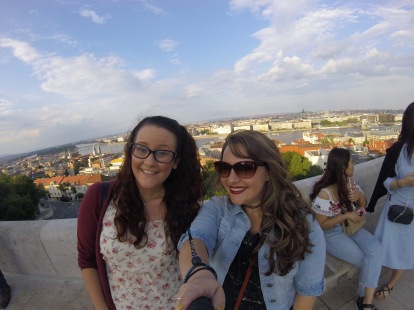 Next we hopped on one of the bridges that led from Buda to Pest and started a scenic drive through the metro center of the city. Our tour guide pointed out noteworthy buildings in all their twilight glory as we bussed past. Apparently the reason for the city’s beautiful architecture is that when Hungary was taken over by the Austrian empire, the Austrians, with their vast wealth, wanted to make sure their new sister city was as beautiful as possible. So basically, they pumped a bunch of money into making sure Budapest was worthy of being a part of their empire. I’m usually pretty anti-imperialist, but good job, Austria. She looks great.

It was about this moment when I realized how amazing this city was. It’s historical. It’s posh. It’s unique. It has that old world charm. Have you ever watched “Say Yes to the Dress,” and they’re trying on a couple of dresses before they find “the one,” and then when they do find the perfect dress, they get this look on their face like they’re giddy as hell? This was me, driving through Budapest. Budapest is my dream wedding dress, my perfect place. I hardly had stepped off the bus and I knew it was going to be my favorite place I’ve ever visited.

Eventually our three hour tour of the city was over and we were more than ready for dinner, which tonight we would be enjoying from the comfort of a luxury river boat. The food was traditional Hungarian, which, was delightful. They started us off with a big buffet of appetizers laden with salami, cheese, salad, and some other starters. For the main course, we had paprikash chicken and goulash, both Hungarian specialties laden with paprika. Hungarians love paprika, they put in everything. Paprika is the Justin Timberlake of Hungary. For good reason! It was delicious. 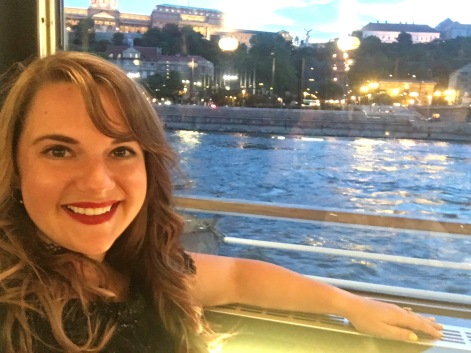 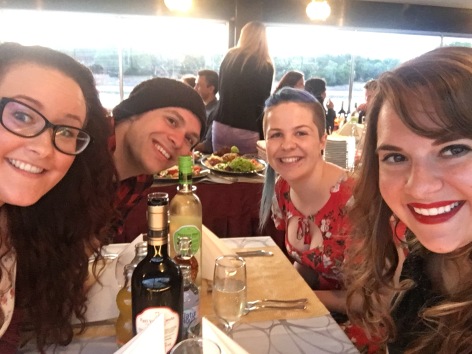 After dinner, a bunch of us went up to the top of the boat to enjoy the buildings on either side of the river. Emma said it best when she said “There’s no city that lights up at night quite like Budapest.” Especially the Parliament building. The lights around it light it up like a golden gem sparkling over the water. I don’t think I’ve seen a more beautiful building at night. 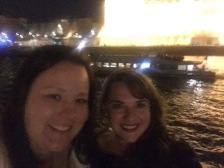 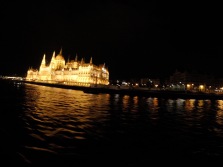 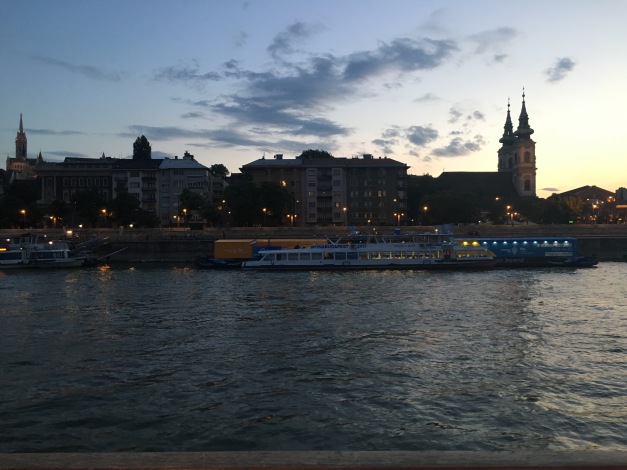 After we’d had our fill of food and wine, it was time to switch gears and meander over to one of Budapest’s famous ruin bars. Basically, these bars are literal ruins. The buildings they are built in were either bombed or destroyed in some other fashion, then repurposed as a drinking establishment. It was really cool! They had a lot of funky decorations, mismatched furniture, and colorful lights.

Whilst in the ruin bar we ran into both locals and tourists, all of whom were nice people. There were a few Hungarian guys that apparently had been laughing in my direction, (probably about my height, considering they were burly Hungarian giants) and I turned around, looking sad. One of them, feeling bad, apologized in English before smiling and kissing me on the hand. That solidified it. I’m moving to Hungary, everyone. 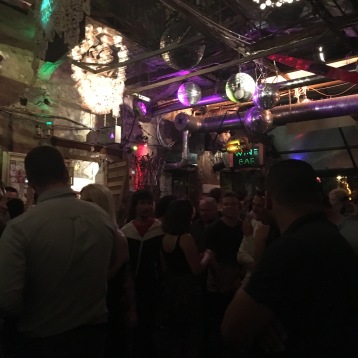 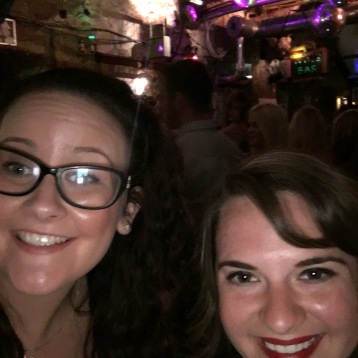 After some chilling out at the bar, I went home with Brodie and Rossene. It was an interesting experience that we will not speak of. I will just say that the cab driver does not like us, and we don’t like him. End of story.

We had so much fun in Budapest and we’d only spent a few hours in the city. Our next say was going to be one without any scheduled activities, so I was excited to wander and get acquainted with my new favorite place.

1 thought on “Budapest Day 1: Cruisin’ on the Danube”