So we woke up at 5am after a night of restless sleep. Nothing says “sweet dreams” ironically like crossing your fingers something is going to work out when you’ve already had a lot of issues with it. The issue at hand, of course, was our flight. We’d been promised by an unnamed Twitter jockey that we’d have seats on a flight to Paris. We’d stayed up till 1am to get that all worked out. We “slept” for four hours. We emerged from our AirBnB, packed, with bags under our eyes, ready to argue with someone at the Iceland Air help desk.

If nothing else, we got to experience the phenomenon of the midnight sun. It was 1pm by the time we went to bed, and it was still light outside.

We started off with a bit of a hiccup, in that we thought we could make the 6:00 bus from Reykjavik to the airport. But, unfortunately I’d misread the bus departure guide and had not realized that the bus didn’t leave until 6:30. That was precious time wasted. Oh no. This was not a good omen. We sat silently on the bus, watching the clock tick by, crossing our fingers that the lines at check-in and security wouldn’t be too long, or that our fight with the Iceland Air agent would take over an hour.

After one last drive through the scenic coastal region of Iceland, we made it to the airport. The check-in line was quite long. But then Jen remembered that we had been booked on the “Saga Class,” which had its own speedy check-in line. So, armed with an unclear email that supposedly claimed we were allowed to cut the line, we hopped over, boxing gloves on.

We gave the attendant our passports, and winced pre-emptively.

After tagging our bags, she handed us back our boarding passes, seats 5F and 5D. Next to each other, right at the front, in the Saga Class section. She informed us of our departure gate, told us our boarding time, and reminded us that the Saga Lounge would be available to us before arrival.

So, dumbfounded and armed with our boarding passes stamped “Saga,” we moseyed to the C terminal and tried to locate the lounge. We were guided by some signage that sent us up an escalator and to a help desk manned by some Iceland Air flight attendants. They asked for our boarding passes. They scanned them, and directed us to the lounge. We turned a corner and found ourselves in an area designed much like the lobby of a classy hotel. On the left was a series of couches and tables and other comfy seats from which you could relax or get some work done before your flight. On the right was a spread of breakfast buffet items and rows of coolers filled with sodas and waters and alcoholic choices. And it was all complimentary.

This is how the other half lives.

So, after spending the blood of our first born children for food in our two first days in Europe, we piled our plates high full of complimentary food, treated ourselves to caffeinated beverages AND chilled water bottles, sat at one of the comfy tables, and enjoyed the scenic views of the Icelandic hills. We tried not to act too excited. If we gave away the fact that we “didn’t belong” with the First Class regulars, they might exile us back to the calamity of the poor man’s airport lobby. 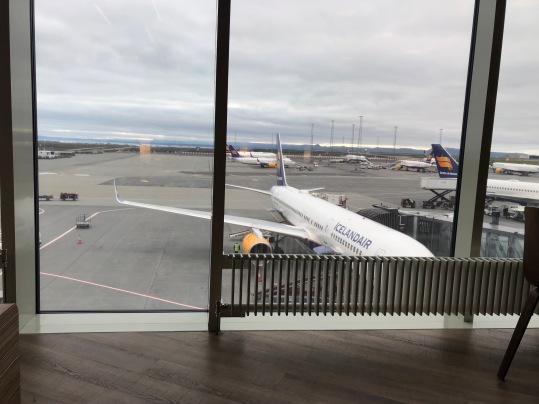 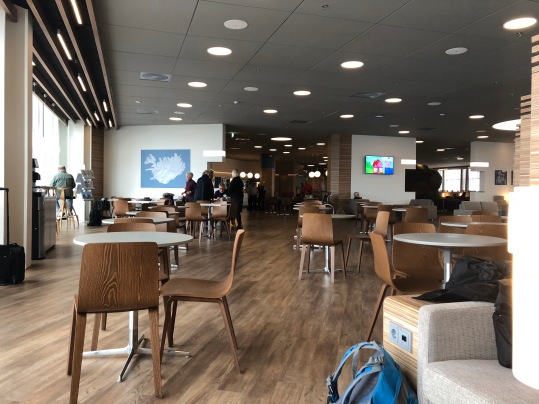 Possibly even more exciting than the buffet spread was the bathroom situation. First of all, on the way to the bathroom, you passed the shower stalls. Yep, before boarding your first class flight, you might want to have yourself a nice shower. Of course they were equipped with soap and shampoo, and a mirror, and a hairdryer, and everything you need to feel nice and fresh. Lovely. And then beyond the showers were the actual bathrooms. The stalls themselves were outfitted with backlighting and a scenic image of the Icelandic countryside, and a reed diffuser that made the tiny room smell like ocean spray. And then of course, for all your hand-washing needs, each individual sink had its own bottle of Blue Lagoon brand soap and lotion, which we had seen on retail AT Blue Lagoon for roughly 75 dollars. SO YEAH. Just a little fancy. 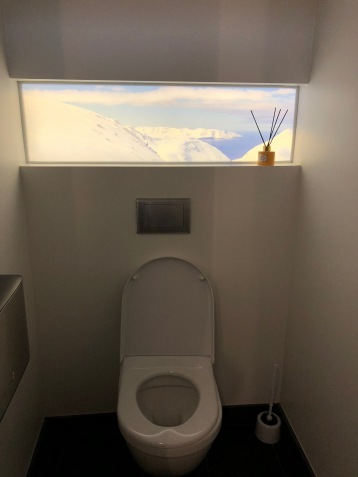 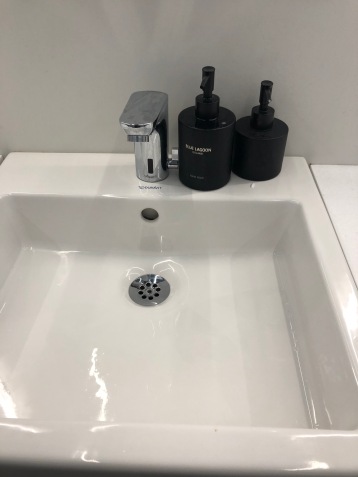 Soon it was time to board, so we pried our way out of the classy lounge area and made our way to the plane. Similarly to check-in, as Saga Class members, we got to skip the line. Of course, this time it was more of a Fastpass situation where once we scanned our tickets, we were put back in line with all the peasants to ride the little shuttle to the plane. Then we boarded and were escorted to row 5.

We each had a nice big seat. For reference, our two seats alone took up enough space as a regular three-seat row on your average plane. Immediately once sitting down, our very nice flight attendant came by and offered us a “breakfast shot” of orange cream liqueur and something else in a little glass shot glass. On any other day, I probably would have gone for it, but I still felt woozy from sleep deprivation, so I declined. We got pillows with real pillowcases and a nice fleece blanket, and were offered noise cancelling headphones to use for the in-flight entertainment. 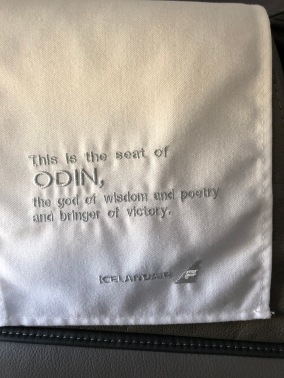 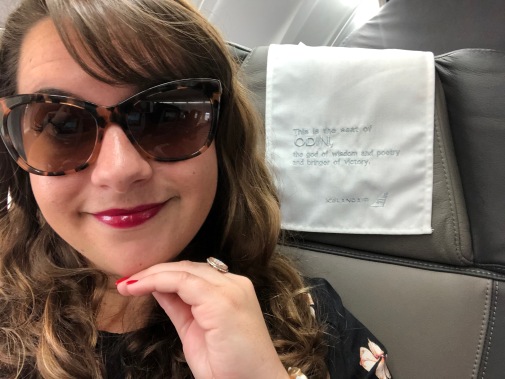 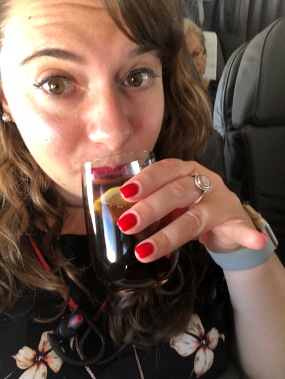 Once we were up in the air, we got sodas in a real glass with a ton of ice, which is a luxury in Europe. Our seats were comfy and reclined pretty far back. I was able to do a bit of writing and get a nap in, while Jen snoozed off-and-on while watching Black Panther. Twas a comfortable and enjoyable first class experience. Bucket list item: checked.

Once we were on the ground, our transportation frenzy began. From the plane, we had to take the RER train from Paris to one of the stations downtown, and from there switch onto another train that would get us to the station closest to our lodging. Meanwhile, we’re doing this all while toting our giant industrial sized suitcases on crowded trains filled with jerks. And then of course, once we had arrived at the final station, we had to tote those suitcases through the streets and across the bridge to our houseboat. Oh yeah, did I mention we were staying at an AirBnB houseboat on the Seine? We were. 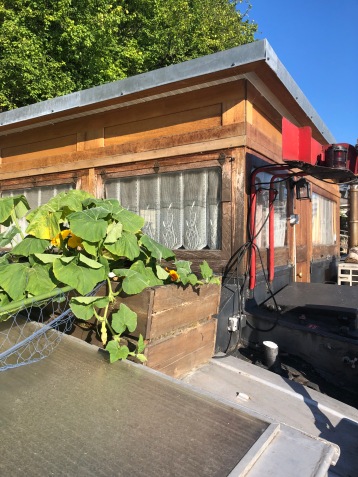 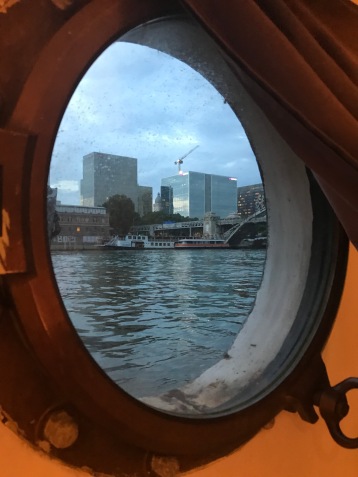 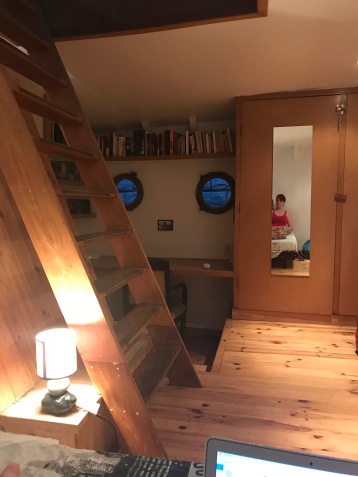 When we got to the boat, it was thankfully air-conditioned, considering we were drenched in sweat and dying of heat stroke. It was also good to recognize that the air-conditioning was going to be of a high-enough caliber to sustain us through the night. You never know what you’re going to get with European air conditioning.

After ditching the industrial-sized suitcases, we decided it was time to explore. It was maybe around 4 in the afternoon by this point, giving us enough time to go on one adventure before calling the day quits. We were both exhausted so we didn’t want to be out too long.

We ventured down the street in search of food and came across a little restaurant called Café Metro. It was down a side-street off the Seine, flanked by pretty Parisian buildings—one in particular featuring a shirtless guy who kept walking around in full view. Jen got a Croque Madame sandwich, which was basically a grilled cheese with a fried egg on top, and I got a mushroom and veggie bruschetta, which I felt was kind of like a toasty pizza on French bread with all of the toppings under the cheese rather than on top. Both were really good. And I got a glass of rosé from Provence, because it was cheaper than a coke, and also, France=wine. 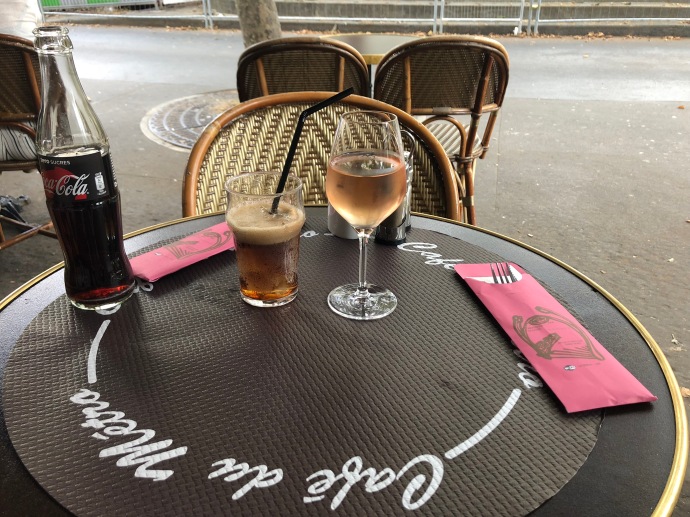 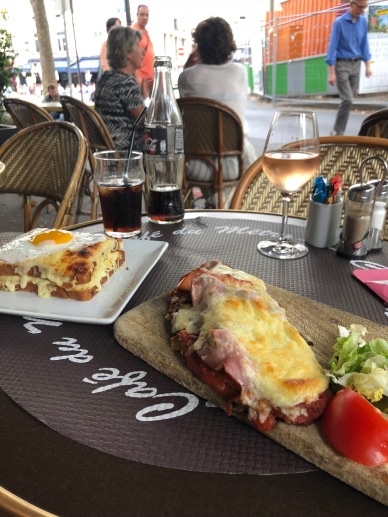 From dinner, we hopped on the train and made our way to Montmartre, which is Paris’s artists’ district. I’d wanted to go there on my last trip but never really found company to do so, so this was my opportunity. We started our journey by climbing the hill to Sacre Cour, Paris’s famous Catholic cathedral that towers over the rest of the city. And really towers. I felt like I was climbing the stairway to heaven. Thankfully we conquered the hill at sunset rather than the heat of the afternoon, so it wasn’t a thousand degrees outside. 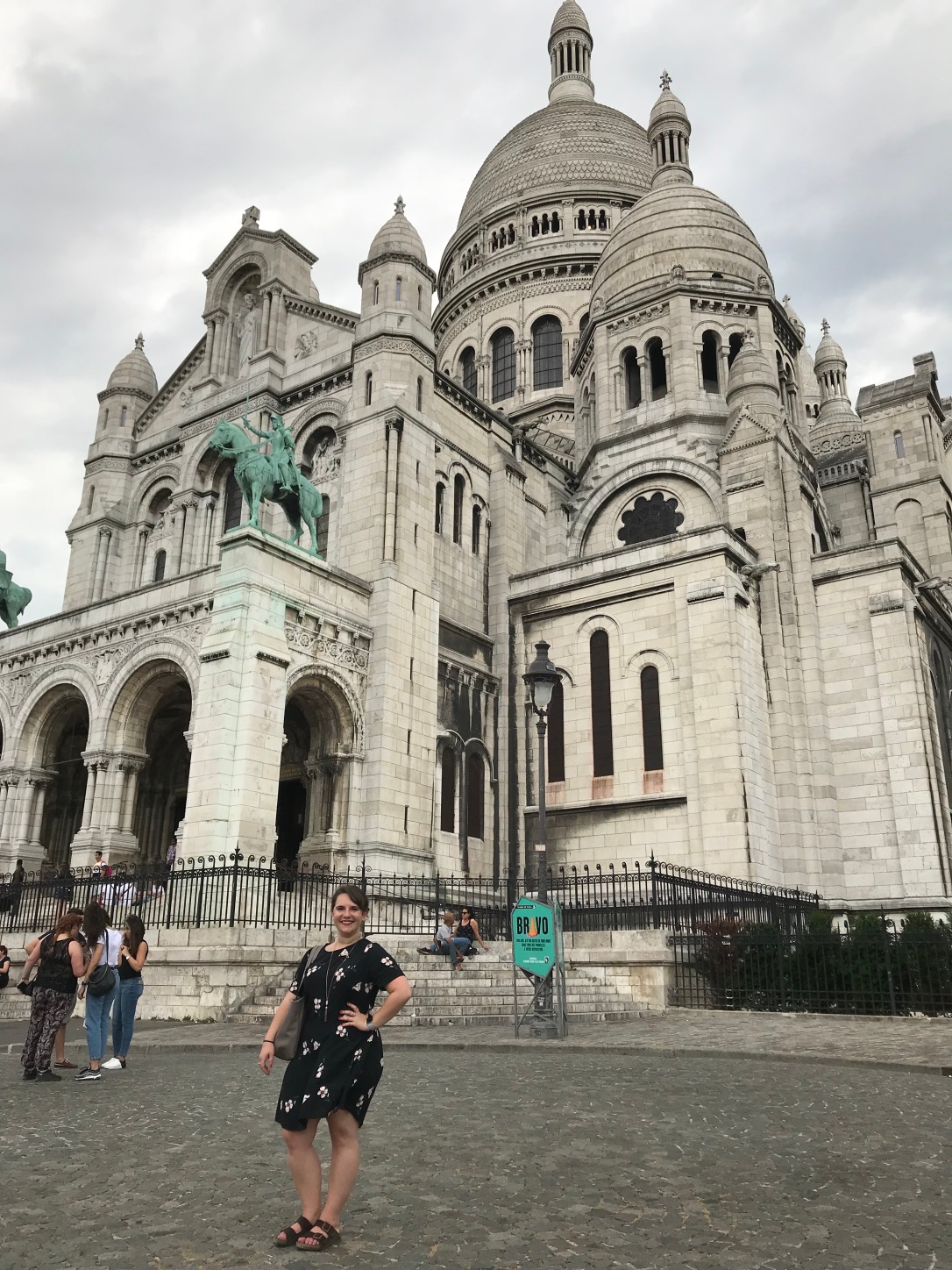 After visiting the church, we went down to the heart of the district, which, thankfully was much less touristy and much more vibrant. One particular square was filled with artists, most of which were drawing caricatures for tourists. But rather than cheesy cartoony photos of people like at Disney World, these were like professional portraits. It was really cool to watch them. There was also art everywhere, on display, for sale. Even the little houses in this area were like charming little cottages with hand-painted murals. This was definitely “Cute Paris.” 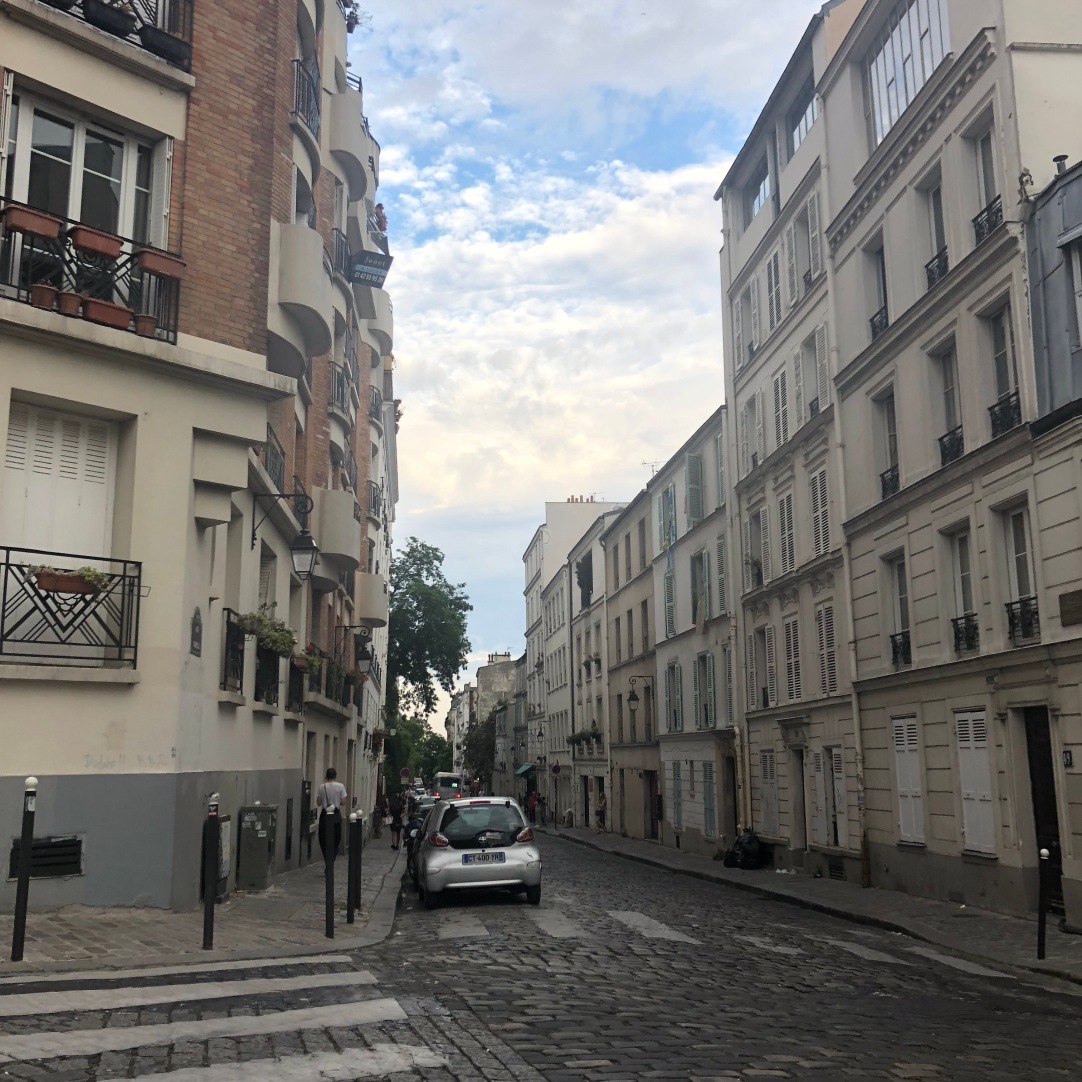 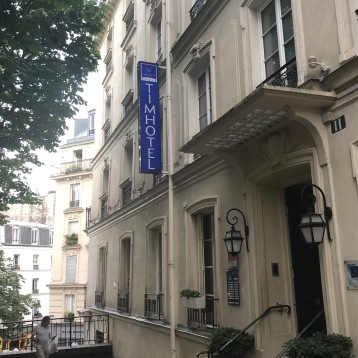 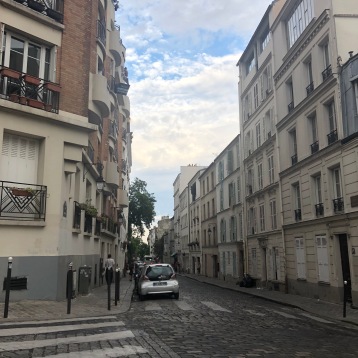 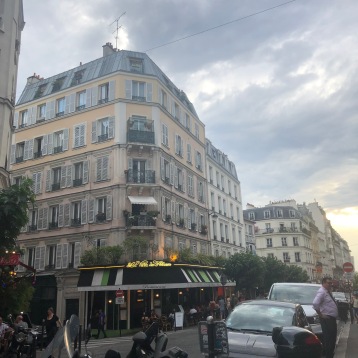 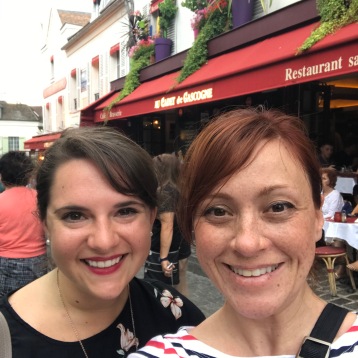 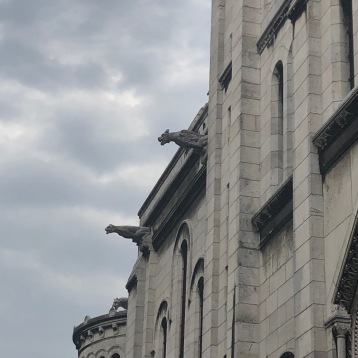 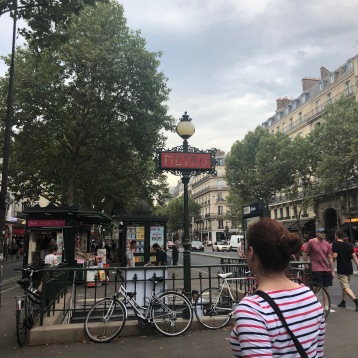 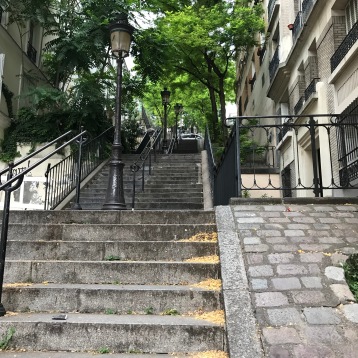 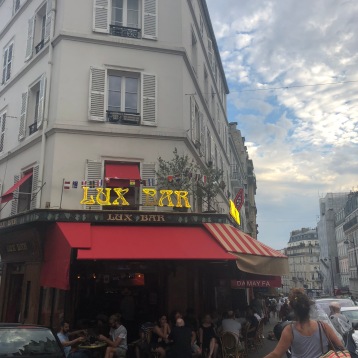 Because it was still decently hot outside, it was time for ice cream. Right in the center square, we found a gelato stand and each got a cone. Jen got straticella, and I went for crème brulee. It was of course, delicious, and really hit the spot in the heat.

I knew that the Moulin Rouge was also in this district, and I’m obsessed with it. I actually went to the Moulin Rouge to see the show two years ago, but we were so rushed, I never got a picture. So, round two, I was able to get one this time in front of the Red Mill.

At that point, we were exhausted. Despite the fact that we had skipped two time zones, it still felt like 10:00, even though our body clocks were set to 8. Which was good. We hopped back onto the houseboat and did some housekeeping. I guess…boatkeeping. We unpacked a bit, settled in, showered up, and Jen killed a moderately large spider for me, which I appreciated. She also admitted she also had already killed one of a similar size earlier, so it wasn’t an isolated incident. We were under attack. Damn you, houseboat.

Regardless of arachnid threats, we had a bed, we were clean, and we were tired. So after checking the bed one last time to make sure we didn’t have any 8-legged company, we were off to sleep. 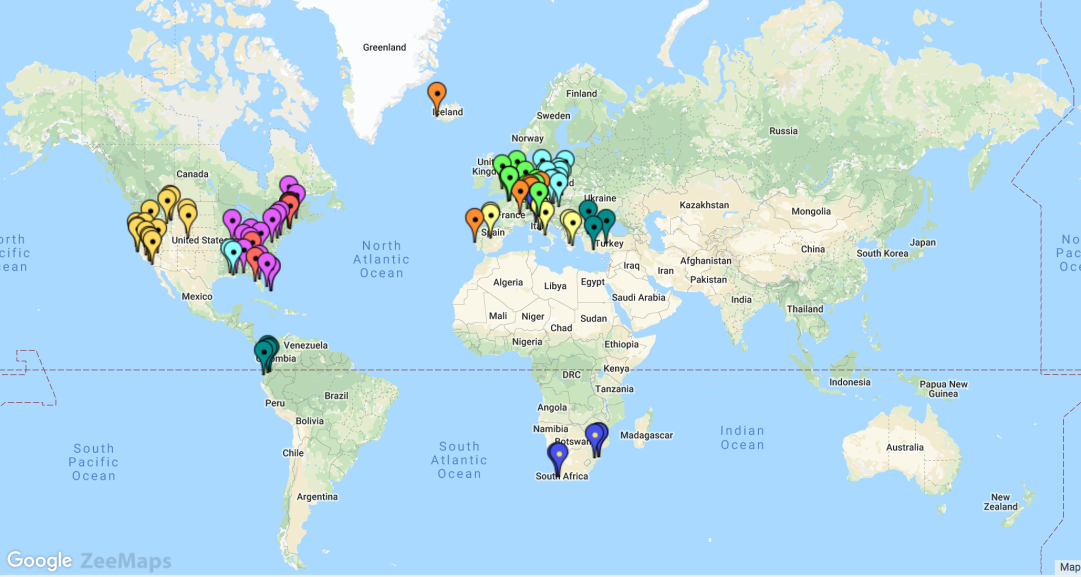