Subtitle: “It’s a great combination of fun, and learning about salt.”

It was our last day on tour, and we were going out with a bang. Our day was filled with scheduled activities, which, although left us limited flexibility to go with the flow, we were excited about our agenda.

We started off with breakfast at the hotel. This was one of my favorite breakfasts, personally. I was just happy they had Greek yogurt and chive goat cheese for toast. And I threw in a croissant for good measure, because it doesn’t rain croissants in the US like it does in Europe.

Our first adventure of the day was the salt mines. Salzburg was named for its location near the salt mines, so it’s kind of a requirement to visit them when you go to Salzburg. Though they were a forty-minute drive away, and we got lost. Twice. We literally had to pull our bus into some guy’s yard and ask him for directions, and then stop on the side of the road to ask a lady who was walking her stroller in the rural hills of Salzburg. Imagine just taking a walk and being asked directions by a bus full of foreign tourists. That was us.

After a little while, we made it to the salt mines. And then the fun began. Jeurgen told us very little about the salt mines before we arrived. It was a location cloaked in mystery. We just kind of figured, “Ok, we take some stairs or an elevator into a mine shaft, look at some salt rocks, ride back up?”

So the first thing that happens is that we are outfitted into miners’ clothes. And then the jokes rained down. “We’re here to change your oil.” “We’re here to pilot your spaceship.” “We’re here to bust some ghosts.” “We’re a group of 20 superheroes ready to fight some crime.” We looked CUTE.

So then we were directed around the corner to the mine train. Yep. So this little train pulls up. It’s like six cars long, and the cars consist of a bench and a bar on one side. You straddled the bench like a horse, held onto the bar on your left, and off you went into the tunnel, but not before getting your souvenir photo taken! For purchase at the end of the ride of course. 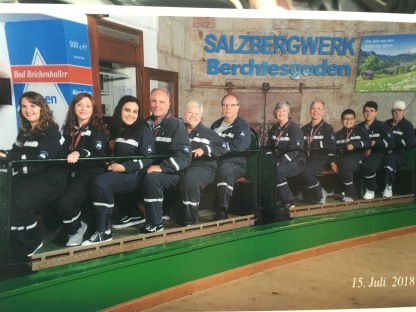 So we tunnel into the mountain, where the cave starts to shrink a little bit and the train sped up. It’s a good thing I’m short and not claustrophobic, because otherwise this little five minute journey into the mountain would have been too much. But we made it, safely. And upon departing the train, we came to the slide.

I kid you not, there’s a wooden slide about a foot wide that you were meant to straddle, along with max three other people at one time, before being pushed down by the train conductor to the bottom of the level. So Randy, Tara, Jen and I all held onto each other for dear life and slid down the wood slide. And of course, you got your picture taken on the way down. It was hilariously fun. Also it made your butt really hot, cuz friction. 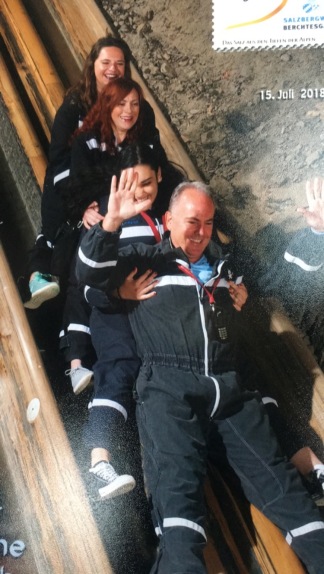 Anyways. So at this point we began the tour. There was a laser show. There were informational videos about drilling. There were drill samples. There were pretty salt sculptures backlit by LED lights. There was an entire laser video about evolution that showed you holograms of fish, frogs, lizards, monkeys, humans and then a box of salt, to remind you that yes, we are ALL salt. I have no words to describe this place beyond “WHERE ARE WE?!” 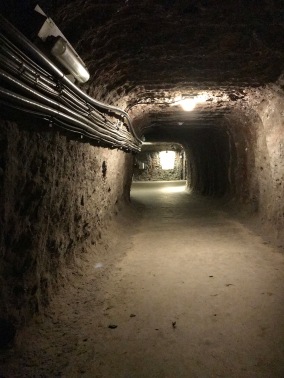 And then we came to another slide.

So the four of us held onto each other AGAIN and slid down to the next level. And at that point we found the boat. 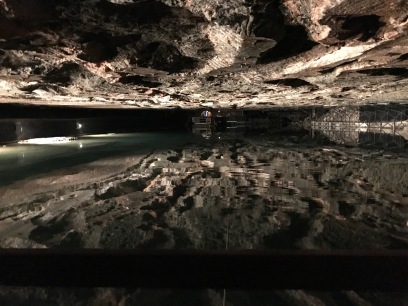 So we get on the boat that takes you across the briny mirror lake while another laser show plays and reflects on the water. The music playing in the background kind of sounded like you were in a spa. I still didn’t know where I was.

On the way off the boat there was also a little fountain where you could stick your finger and taste the salt brine. You’ll never guess what it tasted like.

Our journey ended with a trip up the funicular and back to ground level. We reached the top and purchased our souvenir photos (obviously) and handed back our really cute matching outfits to the people that worked there.

I feel like I may have visited another dimension. I’m still not really sure. What made the salt mine so great is that we had NO IDEA what we were in for, so if you know of anyone visiting that particular location, don’t tell them about the slides. It’s better if you don’t know.

Our next adventure was to visit the Eagle’s Nest, or the house that was built in the mountains near Salzburg as a 50th birthday present to Hitler. Now, the house itself had been demolished on the 7th anniversary of Hitler’s death, so really all that remained of that building was the fireplace and the bronze elevator that we eventually rode to the top.

Now, getting to the elevator was the most treacherous part of the journey. See Jen and I had gotten really good at remembering to take Dramamine before any kind of rough ride. All the Dramamine in the world wouldn’t have saved us from the ride up this mountain. It nearly killed us. We wound up in the back of the hot bus, winding around hairpin curves and up and down hills. We all nearly got whiplash, it was so bad.

The view at the top was pretty, but the ordeal that got us there probably wasn’t worth the view. It was more crowded than Mount Pilatus had been, and had fewer viewpoints. So we got lunch (some tepid hot dogs and French fries, but a decent beer) took our time, and walked around until it was time to descend. 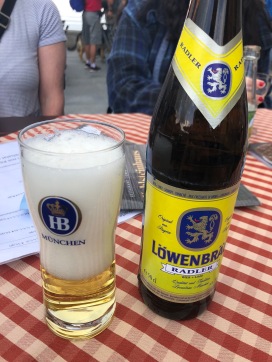 (Ignore the horrible poor, I was recovering.) 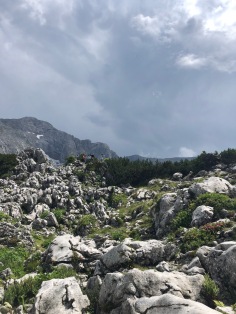 Next we had a bus ride back to the hotel, where I eventually crashed. I hadn’t been feeling well at the beginning of the day but was trying to rally with Advil and food, but at around 4:00 I fell into bed for about twenty minutes. Luckily that’s all I needed to spring back up in preparation for our final activity.

We got ready for our Mozart Concert in the din of the World Cup final soccer game. That is a sentence very few people have probably uttered. Soon we joined up with the rest of our group and made our way back into Salzburg. Our cab driver found the soccer game on his phone and put it up on the dashboard so we could watch while we drove to the game. We realized that was probably illegal, but we enjoyed it anyway.

We soon arrived at St. Peter’s Hall, which is apparently the oldest still-functioning restaurant in Europe. Mozart himself apparently once dined here, so it was fitting we’d be visiting for a Mozart concert. The hall itself was gorgeous, full of chandeliers and candelabras and big stained glass windows. We felt fancy. 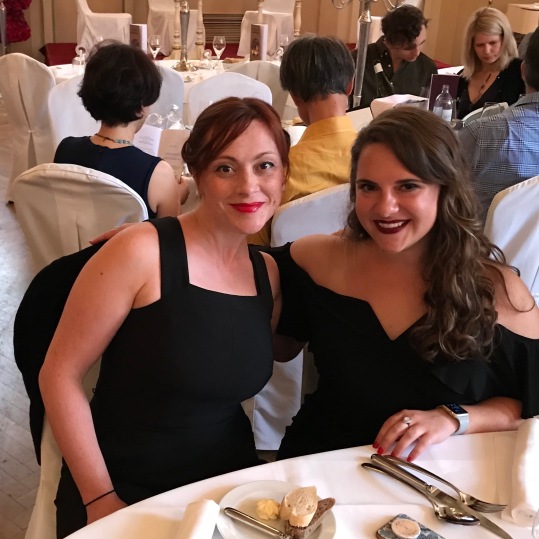 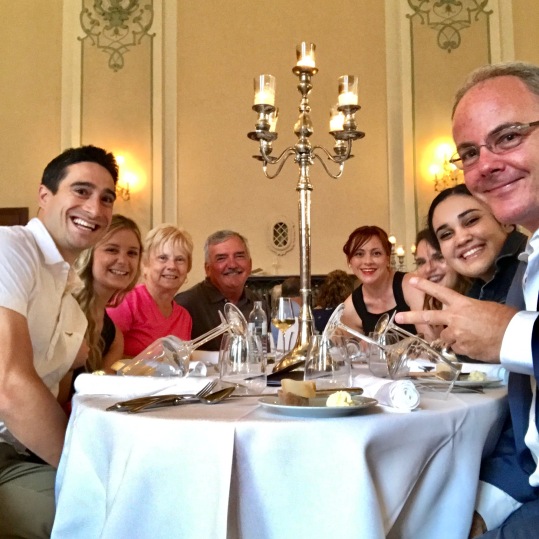 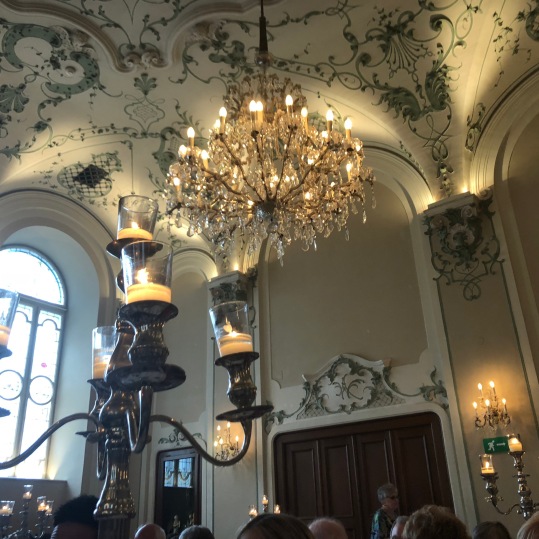 The way the concert worked was that there was a performance after each course of our meal. We started off with a dumpling soup, and soon after we were greeted by an opera performance from “Don Giovanni.” We had the same orchestra and opera singers for the entirety of the show, who were absolutely delightful. The female singer’s voice was nothing short of perfect. She could hit these gorgeous high notes and then float them back down like it was nobody’s business. As for the male opera singer, his face was so emotive and quirky that even though we didn’t understand a word of Italian, we could tell he was being cheeky. 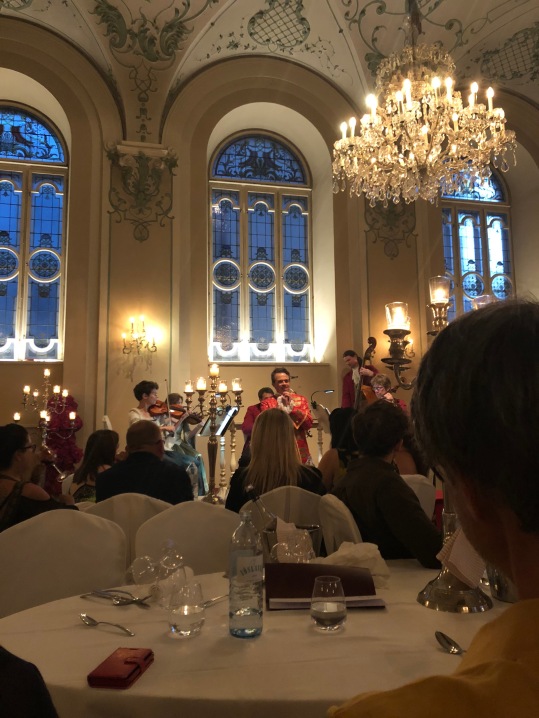 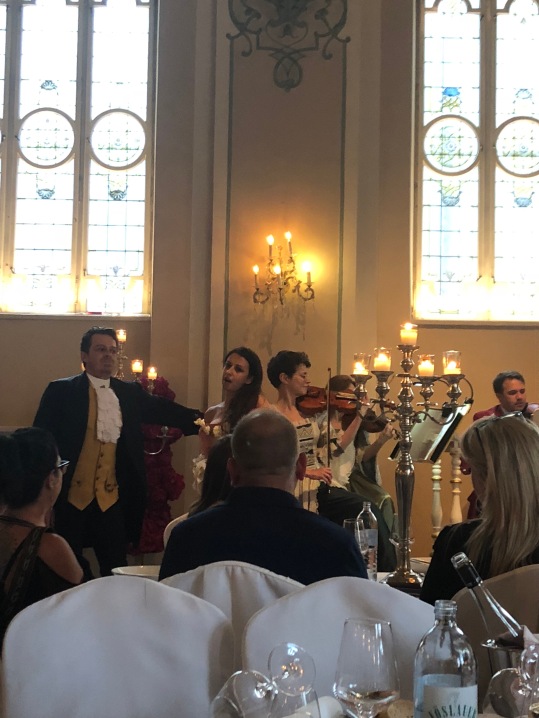 Our main course was chicken, potatoes, beets, carrots, and butternut squash. Definitely “fancy food,” and delicious fancy food at that. The potatoes were especially tasty. And then of course, after we finished, our orchestra and opera singers came back out and performed some pieces from “The Marriage of Figaro.” The male opera singer started singing to a woman in the audience but then eventually switched his gaze over to the woman’s husband, who played along so well that the singer pulled him up in front of the audience and twirled him around like it was nothing. Of course, he was still able to sing perfectly, like it was nothing.

Lastly for dessert we had something called a “semi-frozen parfait,” with three dipping sauces. Of course, one of those “dipping sauces” was some cocoa powder stamped onto our plates traced in Mozart’s silhouette. I’m telling you, Austria loves this guy. It was definitely weird but I kind of liked it? One of the sauces was like an apricot jam, and that was really good on…whatever “frozen parfait” is? Odd. Anyway, the performers came back out again. The male opera singer was traipsing down the aisles finding women to serenade. At one point he was blowing kisses at Oneida, one of the girls in our group. Then he was singing right at Jen for a bit, then looked at me, then looked at Tara, and then the next person in line was Randy and he threw up his hands like “Ahh!” and ran away. This guy was hilarious.

After returning to the hotel, we had to say goodbye to most of our new friends. We were departing on the bus the next morning for Munich at 5:30am, while others were on their way to train stations or the Salzburg airport or so on. So we gave hugs, shared some contact info, and then we headed upstairs to get like five hours of sleep. 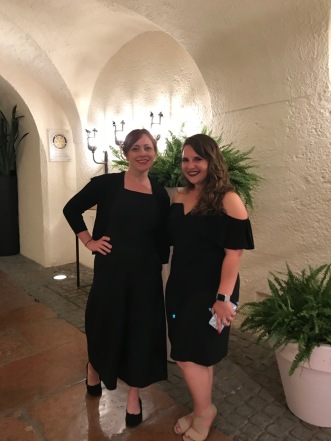