The last real leg of our trip started with a bang with a 4:30 wakeup call. By that, I mean we snoozed our alarms as late as possible and lumbered our way out of our hotel room at the last possible second. Jeurgen even took our bags for us after he told us we’d have to put them on the bus ourselves. We may have been holding everyone up, but we were too tired to feel guilty about it.

We ate our breakfast-in-a-box with caution, as we expected to. Inside was a ham(?) sandwich, an apple, a weird granola bar that was closer to candy, and a yogurt. I ate the yogurt and the apple and then passed out for the duration of the bus ride. You can tell I’m tired if I’m actually capable of passing out on a moving vehicle.

Once we got to the airport at 8am, we began killing time. Originally we had booked train transportation from Salzburg back to the Munich Airport, but when realized we could take our GoAhead bus back for free, we cancelled the train. The one issue with that plan? We were stuck leaving to get to the airport in time for our colleagues’ 8am flight, leaving us plenty of time to relax before our flight at 1:00pm. Yay.

So we ditched our bags (that supposedly are meant to make it to Boston when we do without stopping in Lisbon. I dunno. Stay tuned. *UPDATE: They made it! Woo!) and did some gallivanting around the airport. I got coffee from a cute barista that called me “love” when he handed me my change back, so I’m moving to Germany. We had some food, walked around, did some poking around duty free, all the usual airport things. We even ran into Marcel in the bathroom. He and Steph had taken a cab to the airport for a later flight, so we hadn’t expected to bump into them again, but there they were.

After some lunch in a café, and a 45 minute delay, we were airborne for three hours. I did some writing and took a short nap. Super exciting. But after a little while, we had touched down in Lisbon.

We hired an Uber to get us to our hotel. He was very friendly and showed us all over the map every place in the city that was “beautiful.” While he was driving. It was a little…we’ll go with “thrilling.” But soon we were out of the car and at our hotel.

Okay here’s where it gets crazy. I booked this hotel a couple of months ago by shrugging and saying, “sure, this one looks good.” Probably spent about $150, pretty standard for one night in a hotel that isn’t infested with fleas or next door to a drug den. Somehow we had wound up, again, in a luxury establishment.

It began with a lovely man, Pedro, assisting us with our “luggage.” Mind you, at this point our suitcases were Boston-bound so all we had were two gym bags. But he took them and held them for us while we checked in. Once settled, he directed us to our room. Upon opening the door to our room, our curtains opened automatically, as did a series of blinds that separated the bathroom from the bedroom. When opened, the blinds made visible the glass divider between the beds and the bathtub. I still don’t know who that’s for. Why do you need to see into the bathroom? Mind you, the bathtub was big enough for a family of four, so we’re dealing with a lot. Also the coffee from the coffee maker and the bottled water in the room was all complimentary. How often does THAT happen? 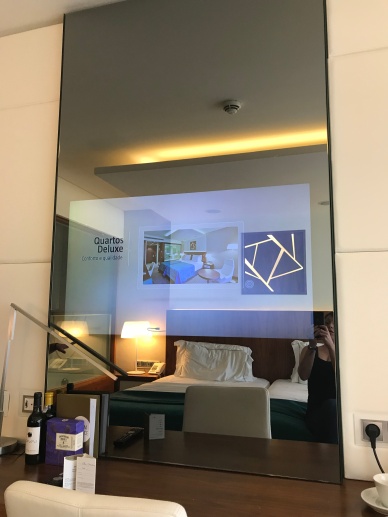 Alright, so I had every intention of trying to get out and see a little bit of Lisbon, but considering I was pale as a ghost and sounded like I’d recently swallowed sandpaper, Jen talked me out of it. I debated whether or not Portugal “counts” if I’ve only seen our hotel and the route to it from the airport, but eh. I stayed the night. We had a view of the ocean. I saw a statue of some Portuguese guy with a lion and a boat under him. Conquest. Sure. Fine. Portugal. I’m gonna go to bed.

So we got dinner at the rooftop deck of our hotel that gave us a view of the ocean. We went downstairs and watched a few more episodes of “The Good Place” before crashing. And THEN in the middle of the night some lady came into our room and left water bottles and chocolate? And like upon entering the room, all the lights triggered on until Jen shut them back off. That was very unsettling for a few moments. Honestly until Jen mentioned it when I woke up, I thought I had dreamed it, but then the water and chocolates were there and we were both like “Oh.” And then we ate the chocolate, cuz…well chocolate. 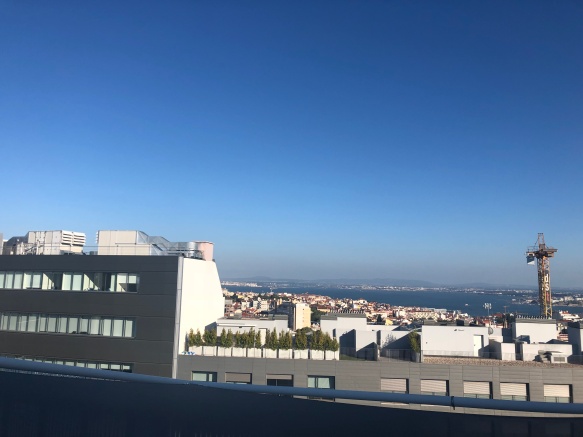 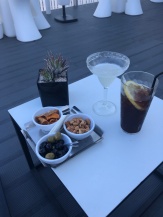 Weird one there, Portugal, but okay.

In the morning we hailed another Uber and were directed to the front of the hotel again by Pedro, who was just as lovely even at 8:00am. From there, we took a quiet ride back to the airport and started our journey back home.

At the airport, we scored some breakfast, coffee, diet coke, and even scored some macarons for the Given children, who had only requested macarons for souvenirs. That worked out. I even found some cough drops, which was a huge victory after I hadn’t seen any at the pharmacy, but then stumbled upon them at the equivalent of a convenience store. We also each impulse bought some Portuguese ceramics, because they were pretty, and again, we were trying to give ourselves some credit for being in Portugal.

On our way to the gate, we got very excited because we got to go through passport control, a rarity once you’re actually inside the EU. The passport control lady was even very pleasant, which is very rare! Portugal seemed super friendly across the board, I have to say.

Soon we had boarded our flight, kicked back, watched our in-flight safety video, and were in the air. I should say “are in the air,” as I’m writing this from the plane right now. We’ve got hours left in our trip and it’s just about come to an end. I’ve gotta say, it’s been a blast. Jen and I have spent the last couple of days trying to categorize our favorite parts of the trip, and it’s been really hard because everything has been lovely.

It was difficult, but I’d have to say my “Top Five,” in no particular order were:

Neuschwanstein: I’ve wanted to come here since I was TINY, and it lived up to my fairy tale dreams. Just being in there was like stepping into a Disney movie. My jaw dropped every time we were in a new room, and I just couldn’t handle how beautiful it was. Ludwig, you might have been nuts, but you sure can build a pretty castle.

Salzburg Salt Mine: I had no idea what I was getting myself into with the salt mine, and that’s what made it so fun. It someone had told me about the tiny train, slides, and 2 minute boat ride, I would have been disappointed I think. But the “WTF” feeling around every corner made this stop hilariously entertaining.

Louvre/Eiffel Day: Jen and I agree that we’re allowed to count this stop as “one thing” because the whole day of Parisian perfection just flowed so seamlessly and perfectly that it counted as one hop. From being in poking distance to Hammurabi’s Code to pressing my nose to the glass cases of blue and yellow Muslim mosaics, to watching the purple sunset from atop the Eiffel tower and seeing its lights go off all around me, this day was nothing short of French magic.

Como boat ride: Alright, Italy, you got me. It was hot as hell that day on Lake Como, but the minute we hopped a boat and started cruising along the turquoise water, past villas more expensive than everyone’s college educations combined, it was hard not to fall in love. And then we finished the day off with that artichoke pasta that I’m still dreaming about. I gotta learn how to make that.

St. Moritz Pool: Come for the mountain views, stay for the water slides. Seriously, I would sleep on the St. Moritz hotel rock bed for weeks if I could keep swimming in that hotel’s pool. The minute we saw “Fun Tower” labeled on one of the doors in the complex, we knew we were in for a good time. And even before that, we had warm water and alpine views. Who could ask for more?

All and all, this was a wonderful trip. My first tour director once told me, you know you’ve had a good trip once you’ve come back broke, fat, and happy, and that’s definitely how I feel. Jen, thanks for being a wonderful trip companion. I wouldn’t have wanted to geek out at the Louvre with anyone else. And to everyone that read along with my adventures, as always, thanks for being a great audience.

Until next time, Ciao!