So, hi. Life got a little busy when I got back from Canada six months ago, hence why there is such a large gap between the posting of days 1-3 of our Canada trip, and days 4 and 5. Now that the school year is over, I figured it’s time to play a little catch-up. Thanks for your patience 🙂

Buckle up kids, this is a long one.

We started the penultimate day to our vacation in the most ideal of fashions: eating more of Geof’s (now famous) latkes. Note: still no pictures, we at them too fast again.

After we’d eaten and gotten dressed, we were ready for the day’s adventure: a journey through the Old City of Quebec. We’d chosen the BEST day for this. Just kidding, it was the coldest day by far at 25 degrees, featuring a 15 degree windchill. You know, the kind of cold that felt like it would freeze your eyeballs and impale your face with icicles.

Time to go walk around outside!

Well, conveniently our first stop was actually indoors. We had decided to spend some time at the Museum of Civilization: a one-stop shop for all of your nerdy dreams. I had no idea this museum was here until Carolyn told us about it, but I’m so glad she did. We spent hours in here, and around every corner, we found something neat.

I’m gonna try and abbreviate the museum stuff to a reasonable level, because if I don’t, I’ll write ten pages on each exhibit. 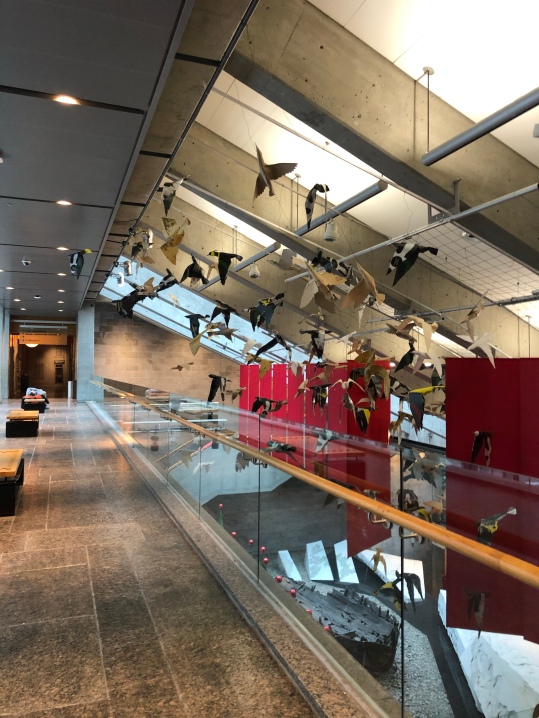 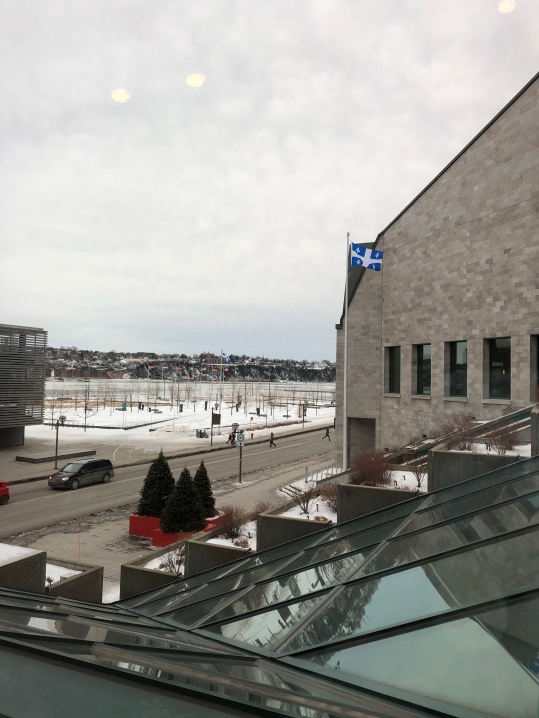 Exhibit 1: Media Storage and consumption. This was kind of a two-part exhibit meant to make you think about how digital media is stored and used. We think a lot of the “cloud” as this big amorphous blob of free storage and energy for all of the data we use, but every email, text, and cute puppy video takes up space somewhere, and takes energy to use and send. Below there’s a photo of an exhibit featuring grains of rice to show how much space data takes up. One grain of rice was equal to one byte of data. Four paint cans of rice show how much data is in a facebook photo. Four bathtubs of rice show how much data is in a 3 minute video. And all that data’s gotta go somewhere!

And then more exhibits to make you think about how often you’re using screens and social media, and how people shift their image whenever they post online. As someone who will take ten different photos and then pick the most flattering to post on this blog, I know I’m guilty of that. Am I gonna change it? Prolly not. The internet doesn’t need to know I really have eight chins. 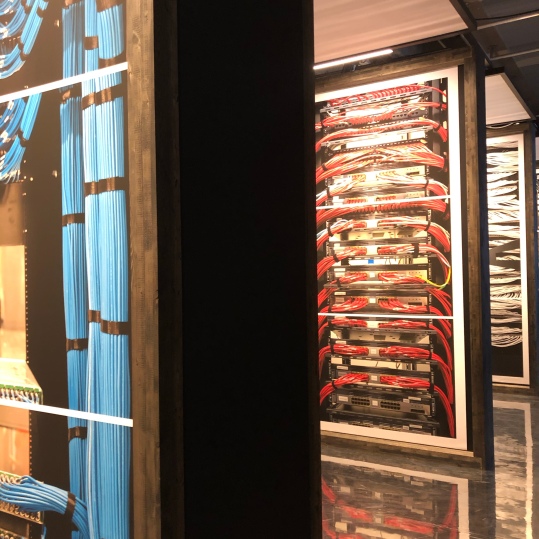 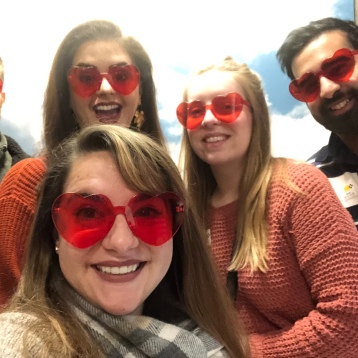 The next exhibit was all about Quebecois history. Some highlights here:

-The French were WAYY chiller with native peoples than the British were in their colonies. They made trade deals and worked with them instead of, y’know… Sad Native American stuff.

-The French made a pretty dumb call setting up the city where they did. Champlain was like “Aha! A river! Perfect for a trade port!” He did not realize that said river was gonna be frozen solid for half the year.

-There was this cool mural made out of discarded Quebecois flags from some kind of rally in the 60s and I took a picture of it from far away. When I got closer I realized the plaque said “do not photograph.” So I’m a rebel. 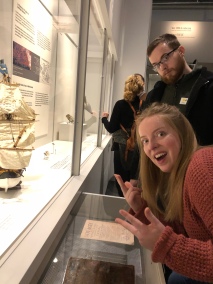 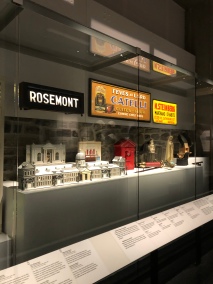 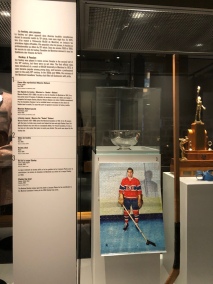 The next one was all about natural history and paleontology. Saw some skeletons. There was a serious lack of dinosaurs, aside from the one outside the exhibit, being festive. But they did have dodo birds, so that was fun. Fun fact: Charles Darwin’s boat was named the Beagle. (That one’s for you, Dad.) 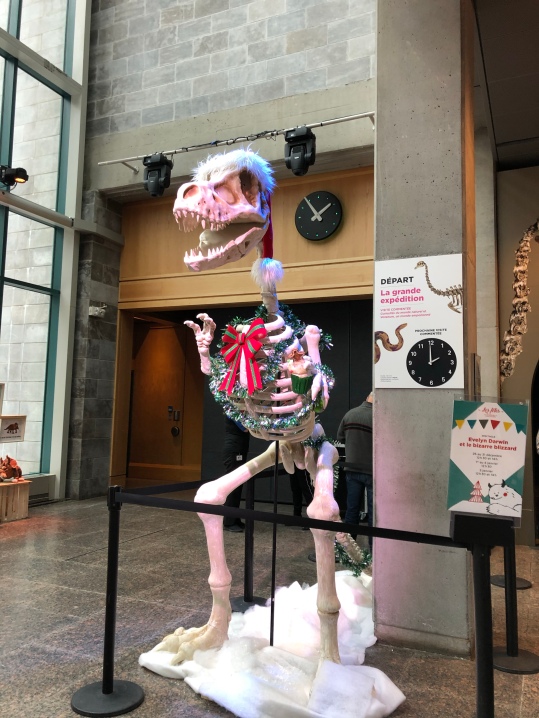 Next we went into an exhibit that was entitled “Venumum: A Poisonous World” which was all about the history and use of poisons and venoms as weapons. This was by far my favorite exhibit. In the entryway here were all these different moving pictures on the wall that went over famous victims of poisons throughout history (Socrates, Cleopatra, Alan Turing–and even an ode to Snow White’s poison apple).

Then when you walked further in there were all these smaller exhibits about the kinds of poisons, where they come from, and what they do to their victims. Another video wall had news clippings of events in history that used poisons for military or terrorist action. Another wall had all these apothecary jars labeled with different kinds of poisons, all lined up in rows as if they belonged in a Disney villain’s pantry. Of course, I had to be careful where I looked, as they also had some examples of poisonous critters–some cute lil snakes, some scorpions, and my nemesis: giant hairy spiders. No thank you. That’s enough of the poison room for today.

After visiting the poison room, we found another exhibit which was all about using your senses. This one was definitely designed for children, so we fit right in. The goal of the exhibit was to search in all these different rooms to find images of “keys,” and if you found all seven…I forget what it was supposed to do. Make you feel good about yourself? I don’t know, I forget. Regardless of the reward, Carolyn and I were determined.

There was a room where you had to look really closely behind you through a mirrored wall to find a key. Another one had you searching for a key in a room full of cluttered junk that looked like an old abandoned General Store. Another had you search through the “forest” for one–I didn’t go in there though, as the clue to help you find the key just said “spider.” Nope no thank you.

But the one I found the most unnerving was the one that made you walk through a pitch black tunnel, only able to guide yourself by feeling the walls. I’m not afraid of the dark. But I didn’t particularly like finding my way in the dark using my hands. I mean, what if there was another spider on the wall?

After leaving the sensory exhibit, we checked out a couple more rooms in the museum. We were starting to drag a bit by this point, so we figured it was about time to meander to our next destination: Old Town Quebec. What a beautiful day for a stroll down beautiful, historical Quebec.

But it was still beautiful! 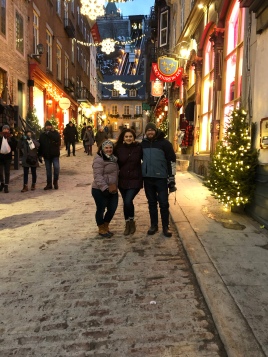 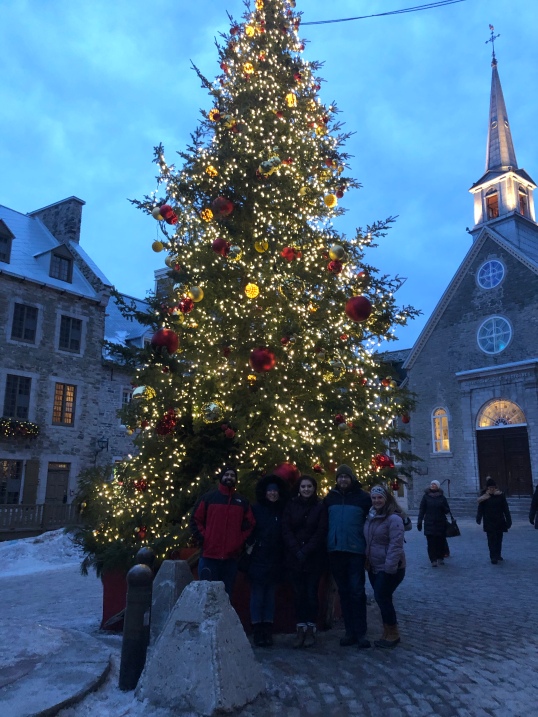 We took a brisk walk around downtown for a bit, stopping in a few shops, taking a few photos. We stumbled upon a group of carolers singing Christmas songs in both French and English, so we stopped for a bit to listen. They were really good! There’s something charming about hearing a song you know in a prettier language than English. But of course, by the time I had my camera back out, they switched back to English. Whatever, still charming!

We also found a cart that sold maple syrup candy. How do they make it, you ask? Well, they pour maple syrup onto a stick and let it freeze on the snow. It is quite possibly the most Canadian thing I’d ever seen. And it was delicious.

From the Old City, we hitched a ride up the famous Quebec City Funicular to get up to the same level as the Chateau Frontenac, which thankfully was drama-free. I’d seen it before with a crazy line, so it was nice to ride the weird trolly/elevator thing without having to wait too long. I forgot to take pictures, but trust me when I say that the view of the river from the funicular was pretty neat. Of course, the minute we were on top of the hill, we were fully exposed to the windchill, so that was less neat.

We still had some time to kill before our dinner reservation, so we figured that now was a good a time as any to ride the famous Quebec City Toboggan Ice Slide. It’s exactly what it sounds like: one of those giant carnival slides, except it’s made of ice, and you ride down on a toboggan. Good old fashioned fun. Of course, it was probably about 5 degrees outside with windchill and we all got off the toboggan with frozen tears in our eyes, but it was still fun!

After the ice slide, we had a little time to kill so we huddled into a Starbucks and waited until it was time to get food. Before we knew it, our reservation time rolled around and we headed to our dinner destination for the evening: Conti. I got steak peppercorn for dinner and creme brulee for dessert. It was all amazing, as usual. Canada knows how to make a meal. 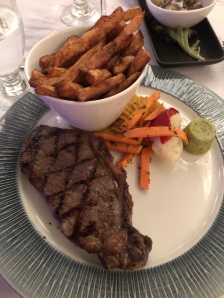 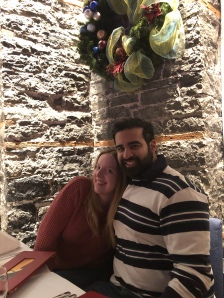 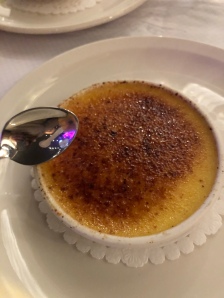 At this point it was fairly late and we knew that we wanted to get back to our AirBnB. We would just need to brave the elements to get there. The walk from the restaurant back to the funicular felt like trying to walk through the airstream of a jet turbine. Also it was snowing. We weren’t gonna make it.

Obviously we made it, I’m just being dramatic. But it was really cold and windy and I was trying not to blow away. 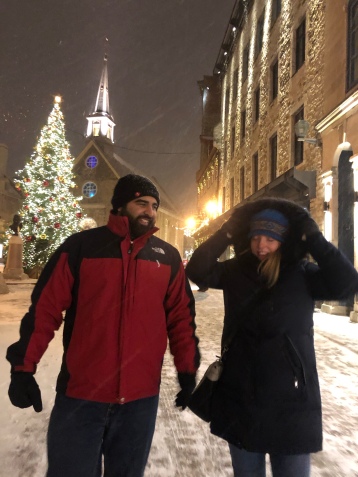